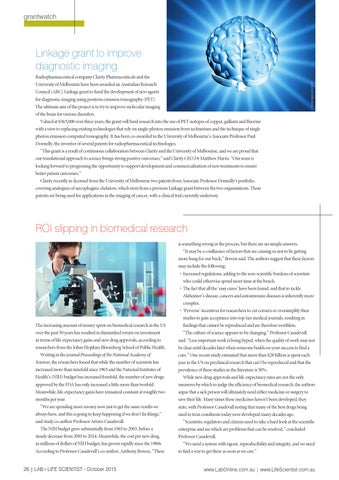 Radiopharmaceutical company Clarity Pharmaceuticals and the University of Melbourne have been awarded an Australian Research Council (ARC) Linkage grant to fund the development of new agents for diagnostic imaging using positron emission tomography (PET). The ultimate aim of the project is to try to improve molecular imaging of the brain for various disorders. Valued at $365,000 over three years, the grant will fund research into the use of PET isotopes of copper, gallium and fluorine with a view to replacing existing technologies that rely on single-photon emission from technetium and the technique of single photon emission computed tomography. It has been co-awarded to the University of Melbourne’s Associate Professor Paul Donnelly, the inventor of several patents for radiopharmaceutical technologies. “This grant is a result of continuous collaboration between Clarity and the University of Melbourne, and we are proud that our translational approach to science brings strong positive outcomes,” said Clarity CEO Dr Matthew Harris. “Our team is looking forward to progressing the opportunity to support development and commercialisation of new treatments to ensure better patient outcomes.” Clarity recently in-licensed from the University of Melbourne two patents from Associate Professor Donnelly’s portfolio, covering analogues of sarcophagine chelators, which stem from a previous Linkage grant between the two organisations. These patents are being used for applications in the imaging of cancer, with a clinical trial currently underway.

ROI slipping in biomedical research is something wrong in the process, but there are no simple answers. “It may be a confluence of factors that are causing us not to be getting more bang for our buck,” Bowen said. The authors suggest that these factors may include the following: © iStockphoto.com/AlexRaths

• Increased regulations, adding to the non-scientific burdens of scientists who could otherwise spend more time at the bench. • The fact that all the ‘easy cures’ have been found, and that to tackle Alzheimer’s disease, cancers and autoimmune diseases is inherently more complex. • ‘Perverse’ incentives for researchers to cut corners or oversimplify their studies to gain acceptance into top-tier medical journals, resulting in The increasing amount of money spent on biomedical research in the US

findings that cannot be reproduced and are therefore worthless.

“The culture of science appears to be changing,” Professor Casadevall

in terms of life-expectancy gains and new drug approvals, according to

said. “Less important work is being hyped, when the quality of work may not

researchers from the Johns Hopkins Bloomberg School of Public Health.

Writing in the journal Proceedings of the National Academy of

cure.” One recent study estimated that more than $28 billion is spent each

Sciences, the researchers found that while the number of scientists has

increased more than ninefold since 1965 and the National Institutes of

prevalence of these studies in the literature is 50%.

approved by the FDA has only increased a little more than twofold.

measures by which to judge the efficiency of biomedical research, the authors

save their life. Many times these medicines haven’t been developed, they

“We are spending more money now just to get the same results we always have, and this is going to keep happening if we don’t fix things,” said study co-author Professor Arturo Casadevall. The NIH budget grew substantially from 1965 to 2003, before a steady decrease from 2003 to 2014. Meanwhile, the cost per new drug, in millions of dollars of NIH budget, has grown rapidly since the 1980s. According to Professor Casadevall’s co-author, Anthony Bowen, “There

state, with Professor Casadevall noting that many of the best drugs being used to treat conditions today were developed many decades ago. “Scientists, regulators and citizens need to take a hard look at the scientific enterprise and see which are problems that can be resolved,” concluded Professor Casadevall. “We need a system with rigour, reproducibility and integrity, and we need to find a way to get there as soon as we can.”