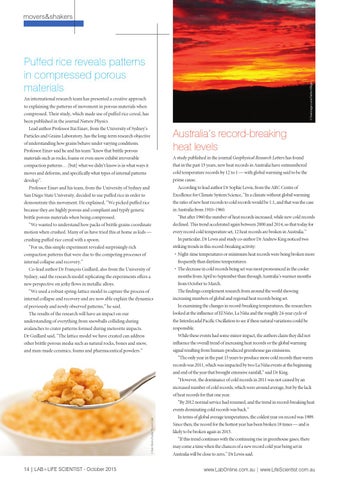 Puffed rice reveals patterns in compressed porous materials An international research team has presented a creative approach to explaining the patterns of movement in porous materials when compressed. Their study, which made use of puffed rice cereal, has been published in the journal Nature Physics. Lead author Professor Itai Einav, from the University of Sydney’s

Professor Einav said he and his team “knew that brittle porous

materials such as rocks, foams or even snow exhibit irreversible

A study published in the journal Geophysical Research Letters has found

that in the past 15 years, new heat records in Australia have outnumbered

moves and deforms, and specifically what types of internal patterns

Particles and Grains Laboratory, has the long-term research objective of understanding how grains behave under varying conditions.

According to lead author Dr Sophie Lewis, from the ARC Centre of

Professor Einav and his team, from the University of Sydney and San Diego State University, decided to use puffed rice in order to

Excellence for Climate System Science, “In a climate without global warming

demonstrate this movement. He explained, “We picked puffed rice

the ratio of new heat records to cold records would be 1:1, and that was the case

because they are highly porous and compliant and typify generic

brittle porous materials when being compressed. “We wanted to understand how packs of brittle grains coordinate motion when crushed. Many of us have tried this at home as kids —

declined. This trend accelerated again between 2000 and 2014, so that today for every record cold temperature set, 12 heat records are broken in Australia.” In particular, Dr Lewis and study co-author Dr Andrew King noticed two

striking trends in this record-breaking activity:

“For us, this simple experiment revealed surprisingly rich

• Night-time temperatures or minimum heat records were being broken more

compaction patterns that were due to the competing processes of

Co-lead author Dr François Guillard, also from the University of Sydney, said the research model replicating the experiments offers a

months from April to September than through Australia’s warmer months

from October to March. The findings complement research from around the world showing

increasing numbers of global and regional heat records being set. In examining the changes in record-breaking temperatures, the researchers

of previously and newly observed patterns,” he said.

looked at the influence of El Niño, La Niña and the roughly 24-year cycle of

responsible. While these events had some minor impact, the authors claim they did not

Dr Guillard said, “The lattice model we have created can address other brittle porous media such as natural rocks, bones and snow,

signal resulting from human-produced greenhouse gas emissions. “The only year in the past 15 years to produce more cold records than warm records was 2011, which was impacted by two La Niña events at the beginning and end of the year that brought extensive rainfall,” said Dr King. “However, the dominance of cold records in 2011 was not caused by an increased number of cold records, which were around average, but by the lack of heat records for that one year. “By 2012 normal service had resumed, and the trend in record-breaking heat

events dominating cold records was back.”

In terms of global average temperatures, the coldest year on record was 1909. Since then, the record for the hottest year has been broken 18 times — and is likely to be broken again in 2015. “If this trend continues with the continuing rise in greenhouse gases, there may come a time when the chances of a new record cold year being set in Australia will be close to zero,” Dr Lewis said.