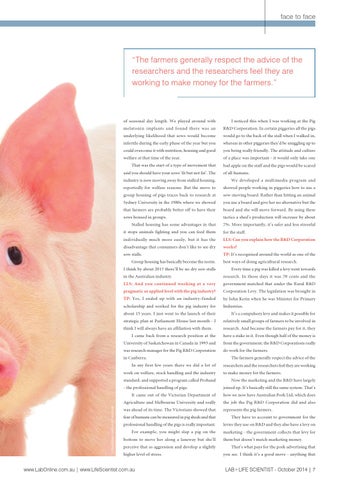 of seasonal day length. We played around with

I noticed this when I was working at the Pig

melatonin implants and found there was an

R&amp;D Corporation. In certain piggeries all the pigs

underlying likelihood that sows would become

would go to the back of the stall when I walked in,

infertile during the early phase of the year but you

whereas in other piggeries they’d be snuggling up to

could overcome it with nutrition, housing and good

you being really friendly. The attitude and culture

welfare at that time of the year.

of a place was important - it would only take one

That was the start of a type of movement that said you should have your sows ‘fit but not fat’. The

industry is now moving away from stalled housing,

We developed a multimedia program and

reportedly for welfare reasons. But the move to

showed people working in piggeries how to use a

group housing of pigs traces back to research at

sow-moving board. Rather than hitting an animal

Sydney University in the 1980s where we showed

you use a board and give her no alternative but the

that farmers are probably better off to have their

board and she will move forward. By using these

tactics a shed’s production will increase by about

Stalled housing has some advantages in that

it stops animals fighting and you can feed them

individually much more easily, but it has the

LLS: Can you explain how the R&amp;D Corporation

TP: It’s recognised around the world as one of the

Group housing has basically become the norm. I think by about 2017 there’ll be no dry sow stalls

best ways of doing agricultural research. Every time a pig was killed a levy went towards

in the Australian industry.

research. In those days it was 70 cents and the

LLS: And you continued working at a very

government matched that under the Rural R&amp;D

pragmatic or applied level with the pig industry?

Corporation Levy. The legislation was brought in

TP: Yes, I ended up with an industry-funded

by John Kerin when he was Minister for Primary

scholarship and worked for the pig industry for

about 15 years. I just went to the launch of their

It’s a compulsory levy and makes it possible for

relatively small groups of farmers to be involved in

think I will always have an affiliation with them.

research. And because the farmers pay for it, they

I came back from a research position at the

have a stake in it. Even though half of the money is

University of Saskatchewan in Canada in 1993 and

from the government, the R&amp;D Corporations really

was research manager for the Pig R&amp;D Corporation

do work for the farmers.

in Canberra. In my first few years there we did a lot of work on welfare, stock handling and the industry standard, and supported a program called Prohand - the professional handling of pigs.

bad apple on the staff and the pigs would be scared

The farmers generally respect the advice of the researchers and the researchers feel they are working to make money for the farmers. Now the marketing and the R&amp;D have largely joined up. It’s basically still the same system. That’s

It came out of the Victorian Department of

how we now have Australian Pork Ltd, which does

Agriculture and Melbourne University and really

the job the Pig R&amp;D Corporation did and also

was ahead of its time. The Victorians showed that

fear of humans can be measured in pig sheds and that

professional handling of the pigs is really important.

levies they use on R&amp;D and they also have a levy on

For example, you might slap a pig on the

marketing - the government collects that levy for

bottom to move her along a laneway but she’ll perceive that as aggression and develop a slightly higher level of stress.

them but doesn’t match marketing money. That’s what pays for the pork advertising that you see. I think it’s a good move - anything that