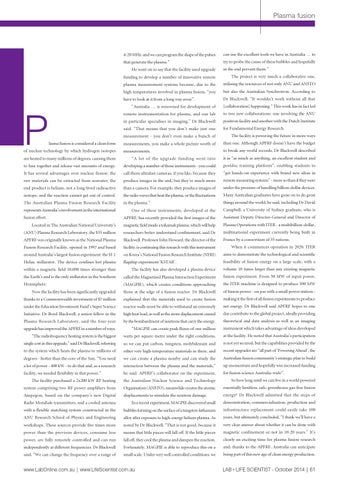 4-20 MHz, and we can program the shape of the pulses

can use the excellent tools we have in Australia … to

that generate the plasma.”

try to probe the cause of these bubbles and hopefully

He went on to say that the facility used upgrade

of nuclear technology by which hydrogen isotopes

in the end prevent them.”

funding to develop a number of innovative remote

The project is very much a collaborative one,

plasma measurement systems because, due to the

utilising the resources of not only ANU and ANSTO

but also the Australian Synchrotron. According to

have to look at it from a long way away”.

Dr Blackwell, “It wouldn’t work without all that

“Australia … is renowned for development of

[collaboration] happening.” This work has in fact led

remote instrumentation for plasma, and our lab

to two new collaborations: one involving the ANU

positron facility and another with the Dutch Institute

said. “That means that you don’t make just one

measurement - you don’t even make a bunch of

The facility is powering the future in more ways

measurements, you make a whole picture worth of

than one. Although APFRF doesn’t have the budget

are heated to many millions of degrees, causing them

“A lot of the upgrade funding went into

it as “as much as anything, an excellent student and

to fuse together and release vast amounts of energy.

developing a number of those instruments - you could

It has several advantages over nuclear fission: the

call them ultrafast cameras, if you like, because they

“get hands-on experience with brand new ideas in

raw materials can be extracted from seawater; the

produce images in the end, but they’re much more

remote measuring systems” - more so than if they were

end product is helium, not a long-lived radioactive

than a camera. For example, they produce images of

under the pressure of handling billion-dollar devices.

isotope; and the reaction cannot get out of control.

the radio waves that heat the plasma, or the fluctuations

Many Australian graduates have gone on to do great

things around the world, he said, including Dr David

represents Australia’s involvement in the international

One of these instruments, developed at the

Campbell, a University of Sydney graduate, who is

APFRF, has recently provided the first images of the

Assistant Deputy Director-General and Director of

Located in The Australian National University’s

magnetic field inside a tokamak plasma, which will help

Plasma Operations with ITER - a multibillion-dollar,

multinational experiment currently being built in

APFRF was originally known as the National Plasma

Blackwell. Professor John Howard, the director of the

France by a consortium of 35 nations.

Fusion Research Facility, opened in 1997 and based

facility, is continuing this research with this instrument

When it commences operation in 2020, ITER

aims to demonstrate the technological and scientific

feasibility of fusion energy on a large scale, with a

within a magnetic field 10,000 times stronger than

The facility has also developed a plasma device

the Earth’s and is the only stellarator in the Southern

the ITER machine is designed to produce 500 MW

Now the facility has been significantly upgraded

those at the edge of a fusion reactor. Dr Blackwell

of fusion power - on par with a small power station -

thanks to a Commonwealth investment of $7 million

explained that the materials used to create fusion

making it the first of all fusion experiments to produce

reactor walls must be able to withstand an extremely

Initiative. Dr Boyd Blackwell, a senior fellow in the

high heat load, as well as the atom displacement caused

by the bombardment of neutrons that carry the energy.

theoretical and data analysis as well as an imaging

upgrade has improved the APFRF in a number of ways.

“MAGPIE can create peak fluxes of one million

“The radiofrequency heating system is the biggest

watts per square metre under the right conditions,

at the facility. He noted that Australia’s participation

so we can put carbon, tungsten, molybdenum and

is not yet secured, but the capabilities provided by the

to the system which heats the plasma to millions of

other very high-temperature materials in there, and

recent upgrades are “all part of ‘Powering Ahead’, the

degrees - hotter than the core of the Sun. “You need

we can create a plasma nearby and can study the

interaction between the plasma and the materials,”

facility, we needed flexibility in that power.”

he said. APFRF’s collaborator on the experiment,

the Australian Nuclear Science and Technology

So how long until we can live in a world powered

Ampegon, based on the company’s new Digital

displacements to simulate the neutron damage.

energy? Dr Blackwell admitted that the steps of

with a flexible matching system constructed in the

bubbles forming on the surface of a tungsten-lathanum

alloy after exposure to high-energy helium plasma. As

years, but ultimately concluded, “I think we’ll have a

noted by Dr Blackwell, “That is not good, because it

very clear answer about whether it can be done with

power, are fully remotely controlled and can run

fall off, they cool the plasma and dampen the reaction.

Fortunately, MAGPIE is able to reproduce this on a

and, thanks to the APFRF, Australia can anticipate

said, “We can change the frequency over a range of

being part of this new age of clean energy production.