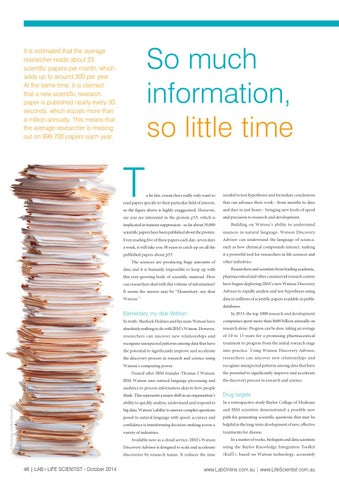 So much information, so little time

o be fair, researchers really only want to

read papers specific to their particular field of interest,

that can advance their work - from months to days

so the figure above is highly exaggerated. However,

and days to just hours - bringing new levels of speed

say you are interested in the protein p53, which is

and precision to research and development.

implicated in tumour suppression - so far about 70,000

Building on Watson’s ability to understand

scientific papers have been published about the protein.

Even reading five of these papers each day, seven days

Advisor can understand the language of science,

a week, it will take you 38 years to catch up on all the

such as how chemical compounds interact, making

it a powerful tool for researchers in life sciences and

The sciences are producing huge amounts of

data and it is humanly impossible to keep up with

Researchers and scientists from leading academic,

this ever-growing body of scientific material. How

pharmaceutical and other commercial research centres

can researchers deal with this volume of information?

It seems the answer may be “Elementary, my dear

data in millions of scientific papers available in public databases.

In truth, Sherlock Holmes and his mate Watson have

absolutely nothing to do with IBM’s Watson. However,

research alone. Progress can be slow, taking an average

researchers can uncover new relationships and

of 10 to 15 years for a promising pharmaceutical

recognise unexpected patterns among data that have

treatment to progress from the initial research stage

the potential to significantly improve and accelerate

the discovery process in research and science using

researchers can uncover new relationships and

recognise unexpected patterns among data that have

the potential to significantly improve and accelerate the discovery process in research and science.

analytics to process information akin to how people

think. This represents a major shift in an organisation’s

ability to quickly analyse, understand and respond to

In a retrospective study Baylor College of Medicine

posed in natural language with speed, accuracy and

path for generating scientific questions that may be

confidence is transforming decision-making across a

helpful in the long-term development of new, effective

In a matter of weeks, biologists and data scientists

Discovery Advisor is designed to scale and accelerate

discoveries by research teams. It reduces the time

(KnIT), based on Watson technology, accurately