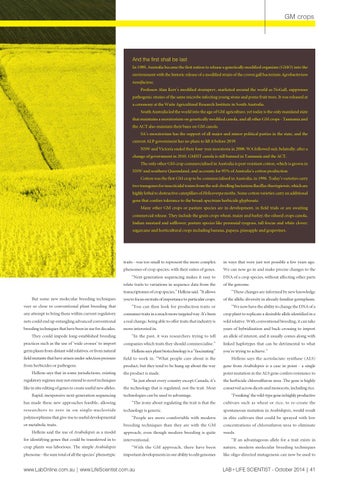 And the first shall be last In 1989, Australia became the first nation to release a genetically modified organism (GMO) into the environment with the historic release of a modified strain of the crown gall bacterium Agrobacterium tumifaciens. Professor Alan Kerr’s modified strainprev, marketed around the world as NoGall, suppresses pathogenic strains of the same microbe infecting young stone and pome fruit trees. It was released at a ceremony at the Waite Agricultural Research Institute in South Australia. South Australia led the world into the age of GM agriculture, yet today is the only mainland state that maintains a moratorium on genetically modified canola, and all other GM crops - Tasmania and the ACT also maintain their bans on GM canola. SA’s moratorium has the support of all major and minor political parties in the state, and the current ALP government has no plans to lift it before 2019. NSW and Victoria ended their four-year moratoria in 2008; WA followed suit, belatedly, after a change of government in 2010. GMHT canola is still banned in Tasmania and the ACT. The only other GM crop commercialised in Australia is pest-resistant cotton, which is grown in NSW and southern Queensland, and accounts for 95% of Australia’s cotton production. Cotton was the first GM crop to be commercialised in Australia, in 1996. Today’s varieties carry two transgenes for insecticidal toxins from the soil-dwelling bacterium Bacillus thuringiensis, which are highly lethal to destructive caterpillars of Helicoverpa moths. Some cotton varieties carry an additional gene that confers tolerance to the broad-spectrum herbicide glyphosate. Many other GM crops or pasture species are in development, in field trials or are awaiting commercial release. They include the grain crops wheat, maize and barley; the oilseed crops canola, Indian mustard and safflower; pasture species like perennial ryegrass, tall fescue and white clover; ©Pencho Tihov/Dollar Photo Club

sugarcane and horticultural crops including banana, papaya, pineapple and grapevines.

traits - was too small to represent the more complex

in ways that were just not possible a few years ago.

phenomes of crop species, with their suites of genes.

We can now go in and make precise changes to the

“Next-generation sequencing makes it easy to

DNA of a crop species, without affecting other parts

“These changes are informed by new knowledge

you to focus on traits of importance to particular crops.

of the allelic diversity in already familiar germplasm.

veer so close to conventional plant breeding that

“You can then look for production traits or

“We now have the ability to change the DNA of a

any attempt to bring them within current regulatory

consumer traits in a much more targeted way. It’s been

crop plant to replicate a desirable allele identified in a

a real change, being able to offer traits that industry is

wild relative. With conventional breeding, it can take

breeding techniques that have been in use for decades.

years of hybridisation and back-crossing to import

They could impede long-established breeding

“In the past, it was researchers trying to tell

an allele of interest, and it usually comes along with

practices such as the use of ‘wide crosses’ to import

companies which traits they should commercialise.”

linked haplotypes that can be detrimental to what

germ plasm from distant wild relatives, or from natural

field mutants that have arisen under selection pressure

field to work in. “What people care about is the

from herbicides or pathogens.

product, but they tend to be hung up about the way

gene from Arabidopsis is a case in point - a single

the product is made.

point mutation in the ALS gene confers resistance to

Hellens says that in some jurisdictions, existing

regulatory regimes may not extend to novel techniques

“In just about every country except Canada, it’s

the herbicide chlorsulfuron urea. The gene is highly

like in situ editing of genes to create useful new alleles.

the technology that is regulated, not the trait. Most

conserved across dicots and monocots, including rice.

Rapid, inexpensive next-generation sequencing has made these new approaches feasible, allowing researchers to zero in on single-nucleotide polymorphisms that give rise to useful developmental or metabolic traits. Hellens said the use of Arabidopsis as a model for identifying genes that could be transferred in to

technologies can be used to advantage. “The irony about regulating the trait is that the technology is generic.

‘Tweaking’ the wild-type gene in highly productive cultivars such as wheat or rice, to re-create the spontaneous mutation in Arabidopsis, would result

“People are more comfortable with modern

in elite cultivars that could be sprayed with low

breeding techniques than they are with the GM

concentrations of chlorsufuron urea to eliminate

approach, even though modern breeding is quite

“If an advantageous allele for a trait exists in

“With the GM approach, there have been

phenome - the sum total of all the species’ phenotypic

important developments in our ability to edit genomes