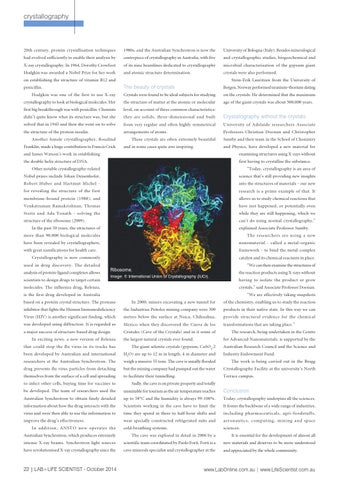 1980s, and the Australian Synchrotron is now the

University of Bologna (Italy). Besides mineralogical

had evolved sufficiently to enable their analysis by

centrepiece of crystallography in Australia, with five

and crystallographic studies, biogeochemical and

of its nine beamlines dedicated to crystallography

microbial characterisation of the gypsum giant

Hodgkin was awarded a Nobel Prize for her work

on establishing the structure of vitamin B12 and

Stein-Erik Lauritzen from the University of

The beauty of crystals

Hodgkin was one of the first to use X-ray

Crystals were found to be ideal subjects for studying

on the crystals. He determined that the maximum

crystallography to look at biological molecules. Her

the structure of matter at the atomic or molecular

didn’t quite know what its structure was, but she

they are solids, three-dimensional and built

Crystallography without the crystals

solved that in 1945 and then she went on to solve

the structure of the protein insulin.

Another female crystallographer, Rosalind Franklin, made a huge contribution to Francis Crick

These crystals are often extremely beautiful and in some cases quite awe inspiring.

Sumby and their team in the School of Chemistry and Physics, have developed a new material for

and James Watson’s work in establishing

the double helix structure of DNA.

first having to crystallise the substance.

“Today, crystallography is an area of

into the structures of materials - our new

for revealing the structure of the first

research is a prime example of that. It

allows us to study chemical reactions that

have just happened, or potentially even

Steitz and Ada Yonath - solving the

while they are still happening, which we

In the past 50 years, the structures of

The researchers are using a new

have been revealed by crystallographers,

with great ramifications for health care.

framework - to bind the metal complex

catalyst and its chemical reactants in place. “We can then examine the structures of

the reaction products using X-rays without having to isolate the product or grow crystals,” said Associate Professor Doonan.

is the first drug developed in Australia

“We are effectively taking snapshots

based on a protein crystal structure. The protease

In 2000, miners excavating a new tunnel for

of the chemistry, enabling us to study the reaction

inhibitor that fights the Human Immunodeficiency

the Industrias Peñoles mining company were 300

products in their native state. In this way we can

Virus (HIV) is another significant finding, which

metres below the surface at Naica, Chihuahua,

provide structural evidence for the chemical

was developed using diffraction. It is regarded as

Mexico when they discovered the Cueva de los

transformations that are taking place.”

Cristales (Cave of the Crystals) and in it some of

In exciting news, a new version of Relenza

the largest natural crystals ever found.

The research, being undertaken in the Centre for Advanced Nanomaterials, is supported by the

that could stop the flu virus in its tracks has

been developed by Australian and international

researchers at the Australian Synchrotron. The

weigh a massive 55 tons. The cave is usually flooded

The work is being carried out in the Bragg

but the mining company had pumped out the water

Crystallography Facility at the university’s North

themselves from the surface of a cell and spreading

to facilitate their tunnelling.

Australian Research Council and the Science and Industry Endowment Fund.

to infect other cells, buying time for vaccines to

Sadly, the cave is on private property and totally

be developed. The team of researchers used the

unsuitable for tourism as the air temperature reaches

Today, crystallography underpins all the sciences.

information about how the drug interacts with the

Scientists working in the cave have to limit the

It forms the backbone of a wide range of industries,

virus and were then able to use the information to

time they spend in there to half-hour shifts and

The cave was explored in detail in 2006 by a

It is essential for the development of almost all

scientific team coordinated by Paolo Forti. Forti is a

new materials and deserves to be more understood

have revolutionised X-ray crystallography since the

cave minerals specialist and crystallographer at the

and appreciated by the whole community.