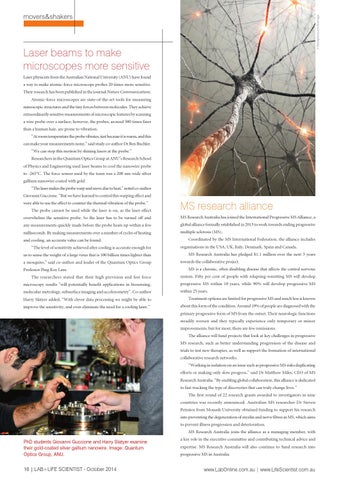 Laser beams to make microscopes more sensitive Laser physicists from the Australian National University (ANU) have found a way to make atomic-force microscope probes 20 times more sensitive. Their research has been published in the journal Nature Communications. Atomic-force microscopes are state-of-the-art tools for measuring nanoscopic structures and the tiny forces between molecules. They achieve extraordinarily sensitive measurements of microscopic features by scanning a wire probe over a surface; however, the probes, around 500 times finer than a human hair, are prone to vibration. “At room temperature the probe vibrates, just because it is warm, and this can make your measurements noisy,” said study co-author Dr Ben Buchler. “We can stop this motion by shining lasers at the probe.” Researchers in the Quantum Optics Group at ANU’s Research School of Physics and Engineering used laser beams to cool the nanowire probe to -265°C. The force sensor used by the team was a 200 nm-wide silver gallium nanowire coated with gold. “The laser makes the probe warp and move due to heat,” noted co-author Giovanni Guccione. “But we have learned to control this warping effect and were able to use the effect to counter the thermal vibration of the probe.” The probe cannot be used while the laser is on, as the laser effect

overwhelms the sensitive probe. So the laser has to be turned off and

global alliance formally established in 2013 to work towards ending progressive

milliseconds. By making measurements over a number of cycles of heating

and cooling, an accurate value can be found. “The level of sensitivity achieved after cooling is accurate enough for us to sense the weight of a large virus that is 100 billion times lighter than a mosquito,” said co-author and leader of the Quantum Optics Group Professor Ping Koy Lam.

Coordinated by the MS International Federation, the alliance includes organisations in the USA, UK, Italy, Denmark, Spain and Canada. MS Research Australia has pledged $1.1 million over the next 3 years towards the collaborative project. MS is a chronic, often disabling disease that affects the central nervous

The researchers stated that their high prevision and fast force

system. Fifty per cent of people with relapsing-remitting MS will develop

Harry Slatyer added, “With clever data processing we might be able to

improve the sensitivity, and even eliminate the need for a cooling laser.”

about this form of the condition. Around 10% of people are diagnosed with the primary progressive form of MS from the outset. Their neurologic functions steadily worsen and they typically experience only temporary or minor improvements, but for most, there are few remissions. The alliance will fund projects that look at key challenges in progressive MS research, such as better understanding progression of the disease and trials to test new therapies, as well as support the formation of international collaborative research networks. “Working in isolation on an issue such as progressive MS risks duplicating efforts or making only slow progress,” said Dr Matthew Miles, CEO of MS Research Australia. “By enabling global collaboration, this alliance is dedicated to fast-tracking the type of discoveries that can truly change lives.” The first round of 22 research grants awarded to investigators in nine countries was recently announced. Australian MS researcher Dr Steven Petratos from Monash University obtained funding to support his research into preventing the degeneration of myelin and nerve fibres in MS, which aims to prevent illness progression and deterioration. MS Research Australia joins the alliance as a managing member, with

a key role in the executive committee and contributing technical advice and expertise. MS Research Australia will also continue to fund research into progressive MS in Australia.