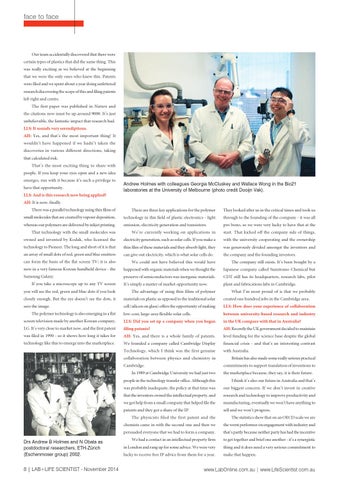 Our team accidentally discovered that there were certain types of plastics that did the same thing. This was really exciting as we believed at the beginning that we were the only ones who knew this. Patents were filed and we spent about a year doing unfettered research discovering the scope of this and filing patents left right and centre. The first paper was published in Nature and the citations now must be up around 9000. It’s just unbelievable, the fantastic impact that research had. LLS: It sounds very serendipitous. AH: Yes, and that’s the most important thing! It wouldn’t have happened if we hadn’t taken the discoveries in various different directions, taking that calculated risk. That’s the most exciting thing to share with people. If you keep your eyes open and a new idea emerges, run with it because it’s such a privilege to have that opportunity. LLS: And is this research now being applied?

Andrew Holmes with colleagues Georgia McCluskey and Wallace Wong in the Bio21 laboratories at the University of Melbourne (photo credit Dooijn Vak).

AH: It is now, finally. There was a parallel technology using thin films of

There are three key applications for the polymer

They looked after us in the critical times and took us

small molecules that are created by vapour deposition,

technology in this field of plastic electronics - light

through to the founding of the company - it was all

whereas our polymers are delivered by inkjet printing.

pro bono, so we were very lucky to have that at the

That technology with the small molecules was

We’re currently working on applications in

start. That kicked off the company side of things,

electricity generation, such as solar cells. If you make a

with the university cooperating and the ownership

technology to Pioneer. The long and short of it is that

thin film of these materials and they absorb light, they

was generously divided amongst the inventors and

an array of small dots of red, green and blue emitters

can give out electricity, which is what solar cells do.

the company and the founding investors.

can form the basis of the flat screen TV; it is also

We could not have believed this would have

The company still exists. It’s been bought by a

now in a very famous Korean handheld device - the

happened with organic materials when we thought the

preserve of semiconductors was inorganic materials.

plant and fabrications labs in Cambridge.

If you take a microscope up to any TV screen you will see the red, green and blue dots if you look

The advantage of using thin films of polymer

closely enough. But the eye doesn’t see the dots, it

materials on plastic as opposed to the traditional solar

created one hundred jobs in the Cambridge area.

cell (silicon on glass) offers the opportunity of making

LLS: How does your experience of collaboration

between university-based research and industry

screen television made by another Korean company,

LLS: Did you set up a company when you began

in the UK compare with that in Australia?

AH: Yes, and there is a whole family of patents.

level funding for the science base despite the global

Technology, which I think was the first genuine

The polymer technology is also emerging in a flat

collaboration between physics and chemistry in Cambridge.

In 1989 at Cambridge University we had just two

What I’m most proud of is that we probably

the marketplace because, they say, it is their future.

people in the technology transfer office. Although this

was probably inadequate, the policy at that time was

our biggest concern. If we don’t invest in creative

that the inventors owned the intellectual property, and

research and technology to improve productivity and

we got help from a small company that helped file the

manufacturing, eventually we won’t have anything to

patents and they got a share of the IP.

sell and we won’t progress.

The physicists filed the first patent and the

The statistics show that on an OECD scale we are

chemists came in with the second one and then we

the worst performer on engagement with industry and

persuaded everyone that we had to form a company.

that’s partly because neither party has had the incentive

We had a contact in an intellectual property firm

to get together and brief one another - it’s a synergistic

in London and rang up for some advice. We were very

thing and it does need a very serious commitment to

lucky to receive free IP advice from them for a year.