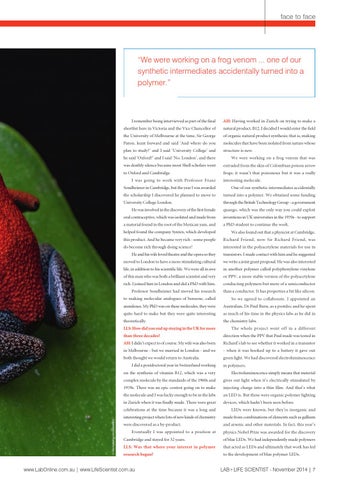 “We were working on a frog venom ... one of our synthetic intermediates accidentally turned into a polymer.”

I remember being interviewed as part of the final

AH: Having worked in Zurich on trying to make a

shortlist here in Victoria and the Vice Chancellor of

natural product, B12, I decided I would enter the field

the University of Melbourne at the time, Sir George

of organic natural product synthesis; that is, making

Paton, leant forward and said ‘And where do you

molecules that have been isolated from nature whose

plan to study?’ and I said ‘University College’ and

We were working on a frog venom that was

was deathly silence because most Shell scholars went

extruded from the skin of Colombian poison arrow

to Oxford and Cambridge.

frogs; it wasn’t that poisonous but it was a really

I was going to work with Professor Franz Sondheimer in Cambridge, but the year I was awarded

One of our synthetic intermediates accidentally

the scholarship I discovered he planned to move to

turned into a polymer. We obtained some funding

through the British Technology Group - a government

He was involved in the discovery of the first female

quango, which was the only way you could exploit

oral contraceptive, which was isolated and made from

inventions in UK universities in the 1970s - to support

a material found in the root of the Mexican yam, and

a PhD student to continue the work.

We also found out that a physicist at Cambridge,

this product. And he became very rich - some people

do become rich through doing science!

He and his wife loved theatre and the opera so they

transistors. I made contact with him and he suggested

moved to London to have a more stimulating cultural

we write a joint grant proposal. He was also interested

life, in addition to his scientific life. We were all in awe

in another polymer called polyphenylene vinylene

of this man who was both a brilliant scientist and very

or PPV, a more stable version of the polyacetylene

rich. I joined him in London and did a PhD with him.

conducting polymers but more of a semiconductor

Professor Sondheimer had moved his research

than a conductor. It has properties a bit like silicon.

So we agreed to collaborate. I appointed an

annulenes. My PhD was on these molecules, they were

Australian, Dr Paul Burn, as a postdoc and he spent

quite hard to make but they were quite interesting

LLS: How did you end up staying in the UK for more

The whole project went off in a different

direction when the PPV that Paul made was tested in

AH: I didn’t expect to of course. My wife was also born

Richard’s lab to see whether it worked in a transistor

in Melbourne - but we married in London - and we

- when it was hooked up to a battery it gave out

both thought we would return to Australia.

green light. We had discovered electroluminescence

I did a postdoctoral year in Switzerland working

on the synthesis of vitamin B12, which was a very

complex molecule by the standards of the 1960s and

gives out light when it’s electrically stimulated by

1970s. There was an epic contest going on to make

injecting charge into a thin film. And that’s what

an LED is. But these were organic polymer lighting

in Zurich when it was finally made. There were great

devices, which hadn’t been seen before.

celebrations at the time because it was a long and

LEDs were known, but they’re inorganic and

interesting project where lots of new kinds of chemistry

made from combinations of elements such as gallium

were discovered as a by-product.

and arsenic and other materials. In fact, this year’s

Eventually I was appointed to a position at

physics Nobel Prize was awarded for the discovery

Cambridge and stayed for 32 years.

of blue LEDs. We had independently made polymers

LLS: Was that where your interest in polymer

that acted as LEDs and ultimately that work has led

to the development of blue polymer LEDs.