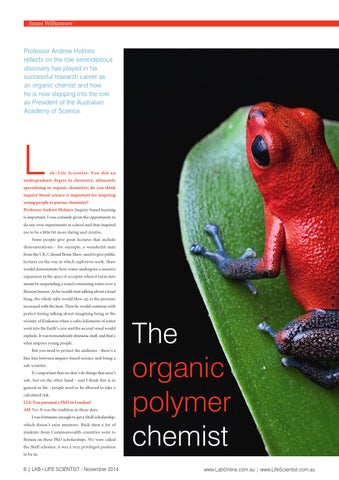 Professor Andrew Holmes reflects on the role serendipitous discovery has played in his successful research career as an organic chemist and how he is now stepping into the role as President of the Australian Academy of Science.

ab+Life Scientist: You did an

undergraduate degree in chemistry, ultimately specialising in organic chemistry; do you think inquiry-based science is important for inspiring young people to pursue chemistry? Professor Andrew Holmes: Inquiry-based learning is important. I was certainly given the opportunity to do my own experiments at school and that inspired me to be a little bit more daring and creative. Some people give great lectures that include demonstrations - for example, a wonderful man from the UK, Colonel Brian Shaw, used to give public lectures on the way in which explosives work. Shaw would demonstrate how water undergoes a massive expansion in the space it occupies when it turns into steam by suspending a vessel containing water over a Bunsen burner. As he would start talking about a loud bang, the whole tube would blow up as the pressure increased with the heat. Then he would continue with perfect timing talking about imagining being in the vicinity of Krakatoa when a cubic kilometre of water went into the Earth’s core and the second vessel would explode. It was tremendously dramatic stuff, and that’s what inspires young people. But you need to protect the audience - there’s a fine line between inquiry-based science and being a safe scientist. It’s important that we don’t do things that aren’t safe, but on the other hand - and I think this is in general in life - people need to be allowed to take a calculated risk. LLS: You pursued a PhD in London? AH: Yes. It was the tradition in those days. I was fortunate enough to get a Shell scholarship, which doesn’t exist anymore. Back then a lot of students from Commonwealth countries went to Britain on these PhD scholarships. We were called the Shell scholars; it was a very privileged position to be in.