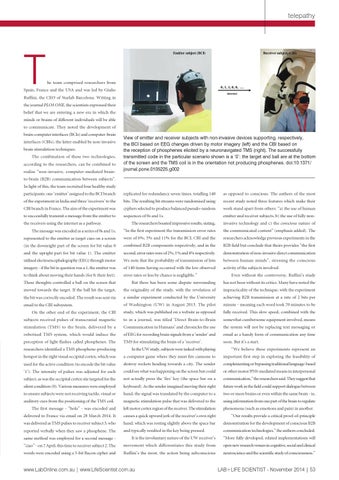 he team comprised researchers from

Spain, France and the USA and was led by Giulio Ruffini, the CEO of Starlab Barcelona. Writing in the journal PLOS ONE, the scientists expressed their belief that we are entering a new era in which the minds or brains of different individuals will be able to communicate. They noted the development of brain-computer interfaces (BCIs) and computer-brain interfaces (CBIs), the latter enabled by non-invasive brain stimulation techniques. The combination of these two technologies, according to the researchers, can be combined to realise “non-invasive, computer-mediated brain-

View of emitter and receiver subjects with non-invasive devices supporting, respectively, the BCI based on EEG changes driven by motor imagery (left) and the CBI based on the reception of phosphenes elicited by a neuronavigated TMS (right). The successfully transmitted code in the particular scenario shown is a ‘0’: the target and ball are at the bottom of the screen and the TMS coil is in the orientation not producing phosphenes. doi:10.1371/ journal.pone.0105225.g002

to-brain (B2B) communication between subjects”. In light of this, the team recruited four healthy study participants: one ‘emitter’ assigned to the BCI branch

as opposed to conscious. The authors of the most

of the experiment in India and three ‘receivers’ to the

CBI branch in France. The aim of the experiment was

work stand apart from others: “a) the use of human

to successfully transmit a message from the emitter to

emitter and receiver subjects, b) the use of fully non-

invasive technology and c) the conscious nature of

The message was encoded as a series of 0s and 1s,

“In the first experiment the transmission error rates

represented to the emitter as target cues on a screen

researchers acknowledge previous experiments in the

(in the downright part of the screen for bit value 0

combined B2B components respectively, and in the

B2B field but conclude that theirs provides “the first

and the upright part for bit value 1). The emitter

We note that the probability of transmission of lists

between human minds”, stressing the conscious

imagery - if the bit in question was a 1, the emitter was

of 140 items having occurred with the low observed

activity of the subjects involved.

to think about moving their hands (for 0, their feet).

error rates or less by chance is negligible.”

the receivers using the internet as a pathway.

Even without the controversy, Ruffini’s study

These thoughts controlled a ball on the screen that

But there has been some dispute surrounding

has not been without its critics. Many have noted the

moved towards the target. If the ball hit the target,

the originality of the study, with the revelation of

impracticality of the technique, with the experiment

the bit was correctly encoded. The result was sent via

a similar experiment conducted by the University

achieving B2B transmission at a rate of 2 bits per

email to the CBI subsystem.

minute - meaning each word took 70 minutes to be

On the other end of the experiment, the CBI

study, which was published on a website as opposed

fully received. This slow speed, combined with the

to in a journal, was titled ‘Direct Brain-to-Brain

stimulation (TMS) to the brain, delivered by a

Communication in Humans’ and chronicles the use

the system will not be replacing text messaging or

robotised TMS system, which would induce the

of EEG for recording brain signals from a ‘sender’ and

email as a handy form of communication any time

TMS for stimulating the brain of a ‘receiver’.

In the UW study, subjects were tasked with playing

“We believe these experiments represent an

hotspot in the right visual occipital cortex, which was

a computer game where they must fire cannons to

important first step in exploring the feasibility of

used for the active condition (to encode the bit value

destroy rockets heading towards a city. The sender

‘1’). The intensity of pulses was adjusted for each

could see what was happening on the screen but could

or other motor/PNS-mediated means in interpersonal

subject, as was the occipital cortex site targeted for the

not actually press the ‘fire’ key (the space bar on a

communication,” the researchers said. They suggest that

keyboard). As the sender imagined moving their right

future work in the field could support dialogue between

to ensure subjects were not receiving tactile, visual or

hand, the signal was translated by the computer to a

two or more brains or even within the same brain - ie,

auditory cues from the positioning of the TMS coil.

magnetic stimulation pulse that was delivered to the

using information from one part of the brain to regulate

The first message - “hola” - was encoded and

left motor cortex region of the receiver. The stimulation

phenomena (such as emotions and pain) in another.

causes a quick upward jerk of the receiver’s own right

“Our results provide a critical proof-of-principle

was delivered as TMS pulses to receiver subject 3, who

hand, which was resting slightly above the space bar

demonstration for the development of conscious B2B

reported verbally when they saw a phosphene. The

and typically resulted in the key being pressed.

same method was employed for a second message -

It is the involuntary nature of the UW receiver’s

movement which differentiates this study from

words were encoded using a 5-bit Bacon cipher and

Ruffini’s the most, the action being subconscious

neuroscience and the scientific study of consciousness.”