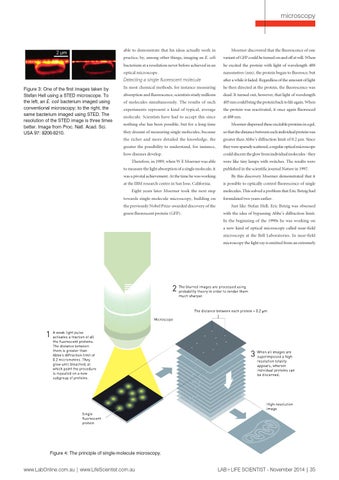 able to demonstrate that his ideas actually work in

Moerner discovered that the fluorescence of one

practice, by, among other things, imaging an E. coli

variant of GFP could be turned on and off at will. When

bacterium at a resolution never before achieved in an

he excited the protein with light of wavelength 488

nanometres (nm), the protein began to fluoresce, but

after a while it faded. Regardless of the amount of light

In most chemical methods, for instance measuring

he then directed at the protein, the fluorescence was

dead. It turned out, however, that light of wavelength

of molecules simultaneously. The results of such

405 nm could bring the protein back to life again. When

the protein was reactivated, it once again fluoresced

molecule. Scientists have had to accept this since

nothing else has been possible, but for a long time

Moerner dispersed these excitable proteins in a gel,

they dreamt of measuring single molecules, because

so that the distance between each individual protein was

the richer and more detailed the knowledge, the

greater than Abbe’s diffraction limit of 0.2 µm. Since

greater the possibility to understand, for instance,

they were sparsely scattered, a regular optical microscope

could discern the glow from individual molecules - they

Therefore, in 1989, when W E Moerner was able to measure the light absorption of a single molecule, it was a pivotal achievement. At the time he was working at the IBM research centre in San Jose, California. Eight years later Moerner took the next step towards single-molecule microscopy, building on the previously Nobel Prize-awarded discovery of the green fluorescent protein (GFP).

were like tiny lamps with switches. The results were published in the scientific journal Nature in 1997. By this discovery Moerner demonstrated that it is possible to optically control fluorescence of single molecules. This solved a problem that Eric Betzig had formulated two years earlier. Just like Stefan Hell, Eric Betzig was obsessed with the idea of bypassing Abbe’s diffraction limit. In the beginning of the 1990s he was working on a new kind of optical microscopy called near-field microscopy at the Bell Laboratories. In near-field microscopy the light ray is emitted from an extremely

Figure 4: The principle of single-molecule microscopy.