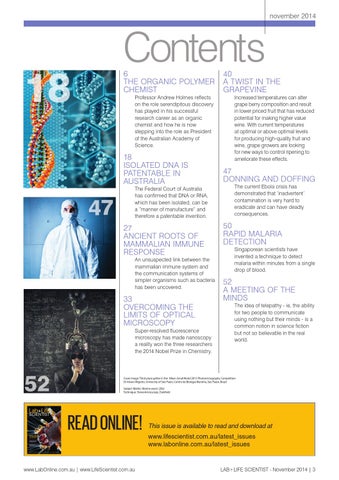 6 THE ORGANIC POLYMER CHEMIST Professor Andrew Holmes reflects on the role serendipitous discovery has played in his successful research career as an organic chemist and how he is now stepping into the role as President of the Australian Academy of Science.

18 ISOLATED DNA IS PATENTABLE IN AUSTRALIA

The Federal Court of Australia has confirmed that DNA or RNA, which has been isolated, can be a “manner of manufacture” and therefore a patentable invention.

27 ANCIENT ROOTS OF MAMMALIAN IMMUNE RESPONSE An unsuspected link between the mammalian immune system and the communication systems of simpler organisms such as bacteria has been uncovered.

33 OVERCOMING THE LIMITS OF OPTICAL MICROSCOPY Super-resolved fluorescence microscopy has made nanoscopy a reality won the three researchers the 2014 Nobel Prize in Chemistry.

40 A TWIST IN THE GRAPEVINE Increased temperatures can alter grape berry composition and result in lower priced fruit that has reduced potential for making higher value wine. With current temperatures at optimal or above optimal levels for producing high-quality fruit and wine, grape growers are looking for new ways to control ripening to ameliorate these effects.

47 DONNING AND DOFFING The current Ebola crisis has demonstrated that ‘inadvertent’ contamination is very hard to eradicate and can have deadly consequences.

50 RAPID MALARIA DETECTION Singaporean scientists have invented a technique to detect malaria within minutes from a single drop of blood.

52 A MEETING OF THE MINDS The idea of telepathy - ie, the ability for two people to communicate using nothing but their minds - is a common notion in science fiction but not so believable in the real world.