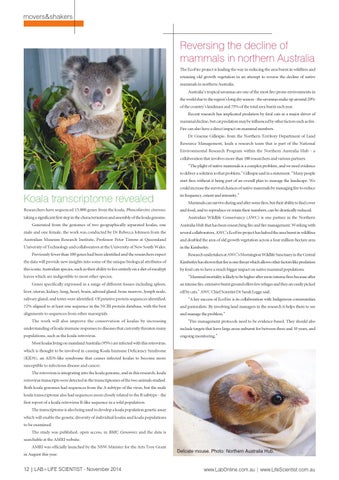 Reversing the decline of mammals in northern Australia The EcoFire project is leading the way in reducing the area burnt in wildfires and retaining old growth vegetation in an attempt to reverse the decline of native mammals in northern Australia. Australia’s tropical savannas are one of the most fire-prone environments in the world due to the region’s long dry season - the savannas make up around 20% of the country’s landmass and 75% of the total area burnt each year. Recent research has implicated predation by feral cats as a major driver of mammal decline, but cat predation may be influenced by other factors such as fire. Fire can also have a direct impact on mammal numbers. Dr Graeme Gillespie, from the Northern Territory Department of Land Resource Management, leads a research team that is part of the National Environmental Research Program within the Northern Australia Hub - a collaboration that involves more than 100 researchers and various partners. “The plight of native mammals is a complex problem, and we need evidence to deliver a solution to that problem,” Gillespie said in a statement. “Many people start fires without it being part of an overall plan to manage the landscape. We could increase the survival chances of native mammals by managing fire to reduce

its frequency, extent and intensity.”

Researchers have sequenced 15,000 genes from the koala, Phascolarctos cinereus,

and food, and to reproduce or retain their numbers, can be drastically reduced.

Mammals can survive during and after some fires, but their ability to find cover

taking a significant first step in the characterisation and assembly of the koala genome.

Australian Wildlife Conservancy (AWC) is one partner in the Northern

Generated from the genomes of two geographically separated koalas, one

Australia Hub that has been researching fire and fire management. Working with

male and one female, the work was conducted by Dr Rebecca Johnson from the

Research undertaken at AWC’s Mornington Wildlife Sanctuary in the Central

this iconic Australian species, such as their ability to live entirely on a diet of eucalypt

by feral cats to have a much bigger impact on native mammal populations.

“Mammal mortality is likely to be higher after more intense fires because after an intense fire, extensive burnt ground offers few refuges and they are easily picked off by cats,” AWC Chief Scientist Dr Sarah Legge said.

“A key success of EcoFire is its collaboration with Indigenous communities

72% aligned to at least one sequence in the NCBI protein database, with the best

and pastoralists. By involving land managers in the research it helps them to see

alignments to sequences from other marsupials.

and manage the problem.”

The work will also improve the conservation of koalas by increasing

“Fire management protocols need to be evidence-based. They should also

understanding of koala immune responses to diseases that currently threaten many

include targets that leave large areas unburnt for between three and 10 years, and

populations, such as the koala retrovirus.

Most koalas living on mainland Australia (95%) are infected with this retrovirus, which is thought to be involved in causing Koala Immune Deficiency Syndrome (KIDS), an AIDS-like syndrome that causes infected koalas to become more susceptible to infectious disease and cancer. The retrovirus is integrating into the koala genome, and in this research, koala retrovirus transcripts were detected in the transcriptomes of the two animals studied. Both koala genomes had sequences from the A subtype of the virus, but the male koala transcriptome also had sequences more closely related to the B subtype - the first report of a koala retrovirus B-like sequence in a wild population. The transcriptome is also being used to develop a koala population genetic assay which will enable the genetic diversity of individual koalas and koala populations to be examined. The study was published, open access, in BMC Genomics and the data is searchable at the AMRI website. AMRI was officially launched by the NSW Minister for the Arts Troy Grant in August this year.