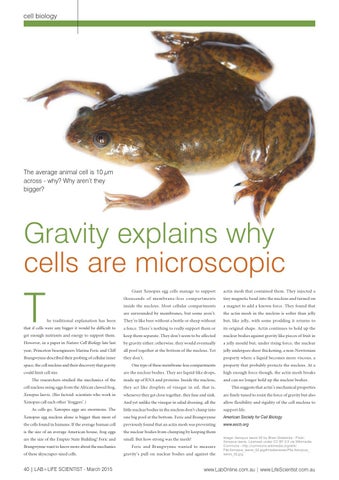 The average animal cell is 10 µm across - why? Why aren’t they bigger?

Gravity explains why cells are microscopic

actin mesh that contained them. They injected a

tiny magnetic bead into the nucleus and turned on

inside the nucleus. Most cellular compartments

a magnet to add a known force. They found that

are surrounded by membranes, but some aren’t.

the actin mesh in the nucleus is softer than jelly

he traditional explanation has been

They’re like beer without a bottle or sheep without

but, like jelly, with some prodding it returns to

that if cells were any bigger it would be difficult to

a fence. There’s nothing to really support them or

its original shape. Actin continues to hold up the

get enough nutrients and energy to support them.

keep them separate. They don’t seem to be affected

nuclear bodies against gravity like pieces of fruit in

However, in a paper in Nature Cell Biology late last

by gravity either; otherwise, they would eventually

a jelly mould but, under rising force, the nuclear

all pool together at the bottom of the nucleus. Yet

property where a liquid becomes more viscous, a

space, the cell nucleus and their discovery that gravity could limit cell size.

One type of these membrane-less compartments

property that probably protects the nucleus. At a

are the nuclear bodies. They are liquid-like drops,

The researchers studied the mechanics of the

made up of RNA and proteins. Inside the nucleus,

and can no longer hold up the nuclear bodies.

they act like droplets of vinegar in oil, that is,

This suggests that actin’s mechanical properties

whenever they get close together, they fuse and sink.

are finely tuned to resist the force of gravity but also

Xenopus call each other ‘froggers’.)

And yet unlike the vinegar in salad dressing, all the

allow flexibility and rigidity of the cell nucleus to

As cells go, Xenopus eggs are enormous. The

little nuclear bodies in the nucleus don’t clump into

Xenopus egg nucleus alone is bigger than most of

one big pool at the bottom. Feric and Brangwynne

the cells found in humans. If the average human cell

previously found that an actin mesh was preventing

is the size of an average American house, frog eggs

the nuclear bodies from clumping by keeping them

are the size of the Empire State Building! Feric and

small. But how strong was the mesh?

Brangwynne want to know more about the mechanics of these skyscraper-sized cells.