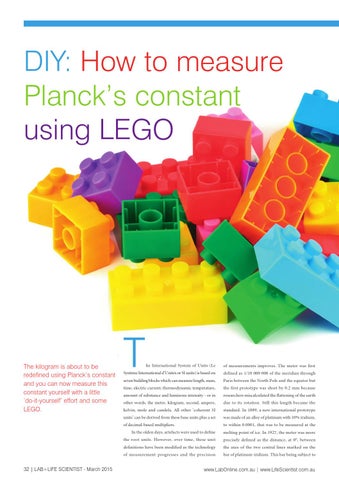 The kilogram is about to be redefined using Planck’s constant and you can now measure this constant yourself with a little ‘do-it-yourself’ effort and some LEGO.

he International System of Units (Le

of measurements improves. The meter was first

Système International d’Unités or SI units) is based on

Paris between the North Pole and the equator but

the first prototype was short by 0.2 mm because

amount of substance and luminous intensity - or in

researchers miscalculated the flattening of the earth

due to its rotation. Still this length became the

kelvin, mole and candela. All other ‘coherent SI

standard. In 1889, a new international prototype

units’ can be derived from these base units plus a set

was made of an alloy of platinum with 10% iridium,

In the olden days, artefacts were used to define

the root units. However, over time, these unit

precisely defined as the distance, at 0°, between

definitions have been modified as the technology

the axes of the two central lines marked on the

of measurement progresses and the precision

bar of platinum-iridium. This bar being subject to