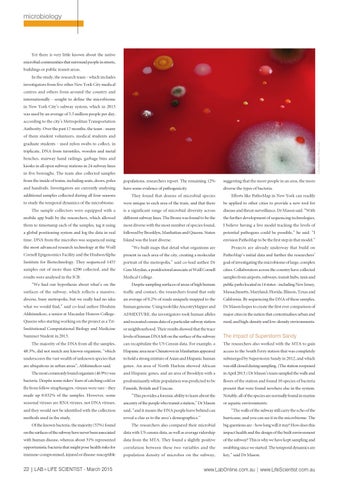 Yet there is very little known about the native microbial communities that surround people in streets, buildings or public transit areas. In the study, the research team - which includes investigators from five other New York City medical centres and others from around the country and internationally - sought to define the microbiome in New York City’s subway system, which in 2013 was used by an average of 5.5 million people per day, according to the city’s Metropolitan Transportation Authority. Over the past 17 months, the team - many of them student volunteers, medical students and ©Zirafek/Dollar Photo Club

graduate students - used nylon swabs to collect, in triplicate, DNA from turnstiles, wooden and metal benches, stairway hand railings, garbage bins and kiosks in all open subway stations in 24 subway lines in five boroughs. The team also collected samples from the inside of trains, including seats, doors, poles

suggesting that the more people in an area, the more

and handrails. Investigators are currently analysing

have some evidence of pathogenicity.

diverse the types of bacteria.

They found that dozens of microbial species

to study the temporal dynamics of the microbiome.

were unique to each area of the train, and that there

be applied to other cities to provide a new tool for

The sample collectors were equipped with a

is a significant range of microbial diversity across

mobile app built by the researchers, which allowed

different subway lines. The Bronx was found to be the

the further development of sequencing technologies,

them to timestamp each of the samples, tag it using

most diverse with the most number of species found,

I believe having a live model tracking the levels of

a global positioning system and log the data in real

potential pathogens could be possible,” he said. “I

time. DNA from the microbes was sequenced using

Island was the least diverse.

envision PathoMap to be the first step in that model.”

the most advanced research technology at the Weill

“We built maps that detail what organisms are

Projects are already underway that build on

Cornell Epigenomics Facility and the HudsonAlpha

present in each area of the city, creating a molecular

Institute for Biotechnology. They sequenced 1457

goal of investigating the microbiome of large, complex

samples out of more than 4200 collected, and the

cities. Collaborators across the country have collected

results were analysed in the ICB.

“We had our hypothesis about what’s on the

Despite sampling surfaces of areas of high human

surfaces of the subway, which reflects a massive,

diverse, busy metropolis, but we really had no idea

an average of 0.2% of reads uniquely mapped to the

California. By sequencing the DNA of these samples,

what we would find,” said co-lead author Ebrahim

Dr Mason hopes to create the first ever comparison of

major cities in the nation that contextualises urban and

Queens who starting working on the project as a Tri-

and recreated census data of a particular subway station

rural, and high-density and low-density environments.

or neighbourhood. Their results showed that the trace

levels of human DNA left on the surface of the subway

The impact of Superstorm Sandy

The majority of the DNA from all the samples,

can recapitulate the US Census data. For example, a

The researchers also worked with the MTA to gain

access to the South Ferry station that was completely

underscores the vast wealth of unknown species that

to hold a strong mixture of Asian and Hispanic human

submerged by Superstorm Sandy in 2012, and which

was still closed during sampling. (The station reopened

The most commonly found organism (46.9%) was

and Hispanic genes, and an area of Brooklyn with a

bacteria. Despite some riders’ fears of catching cold or

predominantly white population was predicted to be

floors of the station and found 10 species of bacteria

flu from fellow straphangers, viruses were rare - they

present that were found nowhere else in the system.

“This provides a forensic ability to learn about the

ancestry of the people who transit a station,” Dr Mason

and they would not be identified with the collection

said, “and it means the DNA people leave behind can

methods used in the study.

reveal a clue as to the area’s demographics.”

Notably, all of the species are normally found in marine or aquatic environments. “The walls of the subway still carry the echo of the hurricane, and you can see it in the microbiome. The

Of the known bacteria, the majority (57%) found

The researchers also compared their microbial

big questions are - how long will it stay? How does this

on the surfaces of the subway have never been associated

data with US census data, as well as average ridership

impact health and the design of the built environment

with human disease, whereas about 31% represented

data from the MTA. They found a slightly positive

of the subway? This is why we have kept sampling and

correlation between these two variables and the

swabbing since we started. The temporal dynamics are

population density of microbes on the subway,