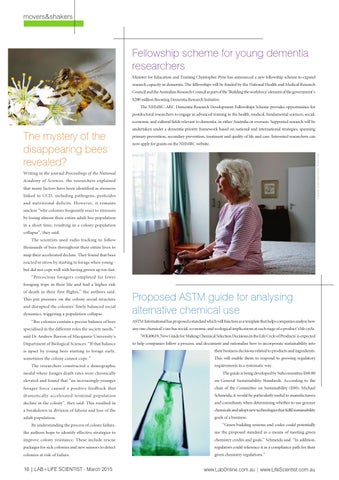 Fellowship scheme for young dementia researchers Minister for Education and Training Christopher Pyne has announced a new fellowship scheme to expand research capacity in dementia. The fellowships will be funded by the National Health and Medical Research Council and the Australian Research Council as part of the ‘Building the workforce’ element of the government’s $200 million Boosting Dementia Research Initiative. The NHMRC-ARC Dementia Research Development Fellowships Scheme provides opportunities for postdoctoral researchers to engage in advanced training in the health, medical, fundamental sciences, social, economic and cultural fields relevant to dementia, in either Australia or overseas. Supported research will be primary prevention, secondary prevention, treatment and quality of life and care. Interested researchers can now apply for grants on the NHMRC website. © Warren Goldswain/Dollar Photo Club

The mystery of the disappearing bees revealed?

undertaken under a dementia priority framework based on national and international strategies, spanning

Writing in the journal Proceedings of the National Academy of Sciences, the researchers explained that many factors have been identified as stressors linked to CCD, including pathogens, pesticides and nutritional deficits. However, it remains unclear “why colonies frequently react to stressors by losing almost their entire adult bee population in a short time, resulting in a colony population collapse”, they said. The scientists used radio tracking to follow thousands of bees throughout their entire lives to map their accelerated decline. They found that bees reacted to stress by starting to forage when young but did not cope well with having grown up too fast. “Precocious foragers completed far fewer foraging trips in their life and had a higher risk of death in their first flights,” the authors said. This put pressure on the colony social structure and disrupted the colonies’ finely balanced social dynamics, triggering a population collapse.

specialised in the different roles the society needs,”

any one chemical’s use has social, economic and ecological implications at each stage of a product’s life cycle.

‘WK40619, New Guide for Making Chemical Selection Decisions in the Life Cycle of Products’ is expected

Department of Biological Sciences. “If that balance

to help companies follow a process, and document and rationalise how to incorporate sustainability into

is upset by young bees starting to forage early,

their business decisions related to products and ingredients.

This will enable them to respond to growing regulatory

The researchers constructed a demographic

requirements in a systematic way.

The guide is being developed by Subcommittee E60.80

elevated and found that “an increasingly younger

on General Sustainability Standards. According to the

chair of the Committee on Sustainability (E60), Michael

Schmeida, it would be particularly useful to manufacturers

decline in the colony”, they said. This resulted in

and consultants when determining whether to use greener

a breakdown in division of labour and loss of the

goals of a business.

By understanding the process of colony failure,

the authors hope to identify effective strategies to

use the proposed standard as a means of meeting green

improve colony resistance. These include rescue

packages for sick colonies and new sensors to detect

regulators could reference it as a compliance path for their

colonies at risk of failure.