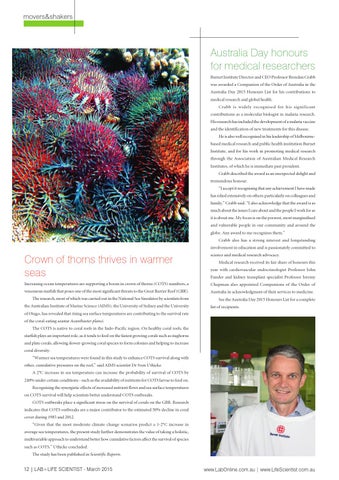 Australia Day honours for medical researchers Burnet Institute Director and CEO Professor Brendan Crabb was awarded a Companion of the Order of Australia in the Australia Day 2015 Honours List for his contributions to medical research and global health. Crabb is widely recognised for his significant contributions as a molecular biologist in malaria research. His research has included the development of a malaria vaccine and the identification of new treatments for this disease. He is also well recognised in his leadership of Melbournebased medical research and public health institution Burnet Institute, and for his work in promoting medical research through the Association of Australian Medical Research Institutes, of which he is immediate past president. Crabb described the award as an unexpected delight and tremendous honour. “I accept it recognising that any achievement I have made has relied extensively on others; particularly on colleagues and family,” Crabb said. “I also acknowledge that the award is as much about the issues I care about and the people I work for as it is about me. My focus is on the poorest, most marginalised and vulnerable people in our community and around the globe. Any award to me recognises them.” Crabb also has a strong interest and longstanding involvement in education and is passionately committed to

Increasing ocean temperatures are supporting a boom in crown of thorns (COTS) numbers, a

Chapman also appointed Companions of the Order of

venomous starfish that poses one of the most significant threats to the Great Barrier Reef (GBR).

Australia in acknowledgment of their services to medicine.

The research, most of which was carried out in the National Sea Simulator by scientists from the Australian Institute of Marine Science (AIMS), the University of Sydney and the University

of Otago, has revealed that rising sea surface temperatures are contributing to the survival rate of the coral-eating seastar Acanthaster planci. The COTS is native to coral reefs in the Indo-Pacific region. On healthy coral reefs, the starfish plays an important role, as it tends to feed on the fastest growing corals such as staghorns and plate corals, allowing slower-growing coral species to form colonies and helping to increase coral diversity. “Warmer sea temperatures were found in this study to enhance COTS survival along with other, cumulative pressures on the reef,” said AIMS scientist Dr Sven Uthicke. A 2°C increase in sea temperature can increase the probability of survival of COTS by 240% under certain conditions - such as the availability of nutrients for COTS larvae to feed on. Recognising the synergistic effects of increased nutrient flows and sea surface temperatures on COTS survival will help scientists better understand COTS outbreaks. COTS outbreaks place a significant stress on the survival of corals on the GBR. Research indicates that COTS outbreaks are a major contributor to the estimated 50% decline in coral cover during 1985 and 2012. “Given that the most moderate climate change scenarios predict a 1-2°C increase in average sea temperatures, the present study further demonstrates the value of taking a holistic, multivariable approach to understand better how cumulative factors affect the survival of species such as COTS,” Uthicke concluded. The study has been published in Scientific Reports.