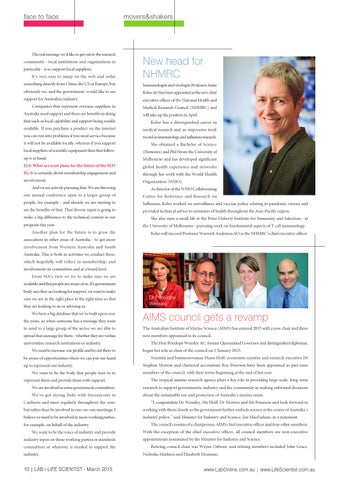 The real message we’d like to get out to the research community - local institutions and organisations in particular - is to support local suppliers. It’s very easy to jump on the web and order

something directly from China, the US or Europe, but

obviously we, and the government, would like to see

Kelso AO has been appointed as the new chief

executive officer of the National Health and

Medical Research Council (NHMRC) and will take up the position in April.

that such as local capability and support being readily

Kelso has a distinguished career in

available. If you purchase a product on the internet

medical research and an impressive track

you can run into problems if you need service because

record in immunology and influenza research.

it will not be available locally, whereas if you support

She obtained a Bachelor of Science

(Honours) and PhD from the University of

up is at hand.

Melbourne and has developed significant

LLS: What are your plans for the future of the SIA?

IG: It is certainly about membership engagement and

through her work with the World Health

And we are actively pursuing that. We are throwing

As director of the WHO Collaborating

our annual conference open to a larger group of

Centre for Reference and Research on

people, for example - and already we are starting to

Influenza, Kelso worked on surveillance and vaccine policy relating to pandemic viruses and

see the benefits of that. That diverse input is going to

provided technical advice to ministers of health throughout the Asia-Pacific region.

make a big difference to the technical content in our program this year. Another plan for the future is to grow the

She also runs a small lab at the Peter Doherty Institute for Immunity and Infection - at the University of Melbourne - pursuing work on fundamental aspects of T cell immunology. Kelso will succeed Professor Warwick Anderson AO as the NHMRC’s chief executive officer.

association in other areas of Australia - to get more involvement from Western Australia and South Australia. This is both in activities we conduct there, which hopefully will reflect in membership, and involvement on committees and at a board level. From SIA’s view we try to make sure we are available and that people are aware of us. If a government body says they are looking for support, we want to make sure we are in the right place at the right time so that they are looking to us or advising us.

the years, so when someone has a message they want

AIMS council gets a revamp

spread that message for them - whether they are within

new members appointed to its council.

We have a big database that we’ve built upon over

universities, research institutions or industry. We need to increase our profile and be out there to be aware of opportunities where we can put our hand up to represent our industry. We want to be the body that people turn to to represent them and provide them with support.

The Hon Penelope Wensley AC, former Queensland Governor and distinguished diplomat, began her role as chair of the council on 1 January 2015. Scientist and businesswoman Diana Hoff, ecosystem scientist and research executive Dr Stephen Morton and chartered accountant Roy Peterson have been appointed as part-time members of the council, with their terms beginning at the end of last year. The tropical marine research agency plays a key role in providing large-scale, long-term

We are involved in some government committees.

research to support governments, industry and the community in making informed decisions

We’ve got strong links with bureaucrats in

about the sustainable use and protection of Australia’s marine estate.

Canberra and meet regularly throughout the year;

but rather than be involved in one-on-one meetings, I

believe we need to be involved in more working parties,

industry policy,” said Minister for Industry and Science, Ian MacFarlane, in a statement.

for example, on behalf of the industry. We want to be the voice of industry and provide industry input on those working parties or standards committees or whatever is needed to support the industry.

The council consists of a chairperson, AIMS chief executive officer and four other members. With the exception of the chief executive officer, all council members are non-executive appointments nominated by the Minister for Industry and Science. Retiring council chair was Wayne Osborn, and retiring members included John Grace, Nicholas Mathiou and Elizabeth Montano.