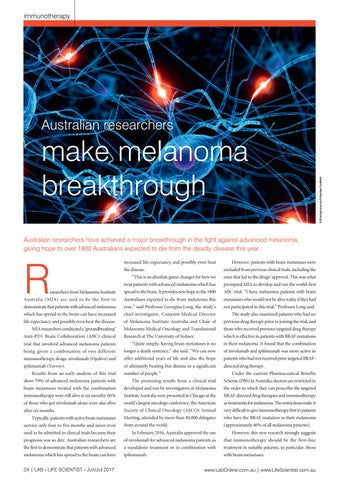 make melanoma breakthrough Australian researchers have achieved a major breakthrough in the fight against advanced melanoma, giving hope to over 1800 Australians expected to die from the deadly disease this year.

increased life expectancy and possibly even beat the disease.

However, patients with brain metastases were excluded from previous clinical trials, including the

“This is an absolute game changer for how we

ones that led to the drugs’ approval. This was what

treat patients with advanced melanoma which has

prompted MIA to develop and run the world-first

spread to the brain. It provides new hope to the 1800

ABC trial. “I have melanoma patients with brain

Australia (MIA) are said to be the first to

Australians expected to die from melanoma this

metastases who would not be alive today if they had

demonstrate that patients with advanced melanoma

not participated in this trial,” Professor Long said.

which has spread to the brain can have increased

The study also examined patients who had no

life expectancy and possibly even beat the disease.

of Melanoma Institute Australia and Chair of

previous drug therapy prior to joining the trial, and

Research at The University of Sydney.

which is effective in patients with BRAF mutations

“Quite simply, having brain metastases is no

in their melanoma. It found that the combination

being given a combination of two different

longer a death sentence,” she said. “We can now

of nivolumab and ipilimumab was more active in

offer additional years of life and also the hope

patients who had not received prior targeted BRAF-

of ultimately beating this disease to a significant

Results from an early analysis of this trial

Under the current Pharmaceutical Benefits

show 79% of advanced melanoma patients with

The promising results from a clinical trial

Scheme (PBS) in Australia, doctors are restricted in

brain metastases treated with the combination

developed and run by investigators at Melanoma

the order in which they can prescribe the targeted

Institute Australia were presented in Chicago at the

of those who got nivolumab alone were also alive

as treatments for melanoma. The restrictions make it

very difficult to give immunotherapy first to patients

Meeting, attended by more than 30,000 delegates

who have the BRAF mutation in their melanoma

from around the world.

(approximately 40% of all melanoma patients).

Typically, patients with active brain metastases survive only four to five months and never even used to be admitted to clinical trials because their

In February 2016, Australia approved the use

However, this new research strongly suggests

prognosis was so dire. Australian researchers are

of nivolumab for advanced melanoma patients as

that immunotherapy should be the first-line

the first to demonstrate that patients with advanced

a standalone treatment or in combination with

treatment in suitable patients, in particular, those

melanoma which has spread to the brain can have