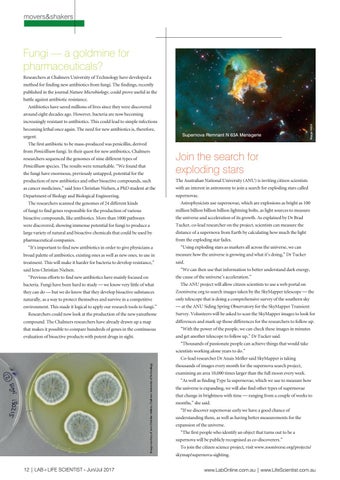 Fungi — a goldmine for pharmaceuticals? Researchers at Chalmers University of Technology have developed a method for finding new antibiotics from fungi. The findings, recently published in the journal Nature Microbiology, could prove useful in the battle against antibiotic resistance. Antibiotics have saved millions of lives since they were discovered increasingly resistant to antibiotics. This could lead to simple infections becoming lethal once again. The need for new antibiotics is, therefore, Supernova Remnant N 63A Menagerie

around eight decades ago. However, bacteria are now becoming

The first antibiotic to be mass-produced was penicillin, derived from Penicillium fungi. In their quest for new antibiotics, Chalmers

the fungi have enormous, previously untapped, potential for the

Join the search for exploding stars

production of new antibiotics and other bioactive compounds, such

as cancer medicines,” said Jens Christian Nielsen, a PhD student at the

Department of Biology and Biological Engineering.

researchers sequenced the genomes of nine different types of Penicillium species. The results were remarkable. “We found that

Astrophysicists use supernovae, which are explosions as bright as 100

the universe and acceleration of its growth. As explained by Dr Brad

were discovered, showing immense potential for fungi to produce a

Tucker, co-lead researcher on the project, scientists can measure the

from the exploding star fades.

“Using exploding stars as markers all across the universe, we can

broad palette of antibiotics, existing ones as well as new ones, to use in

measure how the universe is growing and what it’s doing,” Dr Tucker

treatment. This will make it harder for bacteria to develop resistance,”

said. “We can then use that information to better understand dark energy,

the cause of the universe’s acceleration.”

“Previous efforts to find new antibiotics have mainly focused on bacteria. Fungi have been hard to study — we know very little of what

Zooniverse.org to search images taken by the SkyMapper telescope — the

naturally, as a way to protect themselves and survive in a competitive

environment. This made it logical to apply our research tools to fungi.”

— at the ANU Siding Spring Observatory for the SkyMapper Transient

Researchers could now look at the production of the new yanuthone compound. The Chalmers researchers have already drawn up a map that makes it possible to compare hundreds of genes in the continuous

Survey. Volunteers will be asked to scan the SkyMapper images to look for differences and mark up those differences for the researchers to follow up. “With the power of the people, we can check these images in minutes and get another telescope to follow up,” Dr Tucker said.

evaluation of bioactive products with potent drugs in sight.

“Thousands of passionate people can achieve things that would take scientists working alone years to do.” Image courtesy of Jens Christian Nielsen, Chalmers University of Technology

thousands of images every month for the supernova search project, examining an area 10,000 times larger than the full moon every week. “As well as finding Type Ia supernovae, which we use to measure how the universe is expanding, we will also find other types of supernovae that change in brightness with time — ranging from a couple of weeks to months,” she said. “If we discover supernovae early we have a good chance of understanding them, as well as having better measurements for the expansion of the universe. “The first people who identify an object that turns out to be a supernova will be publicly recognised as co-discoverers.” To join the citizen science project, visit www.zooniverse.org/projects/ skymap/supernova-sighting.