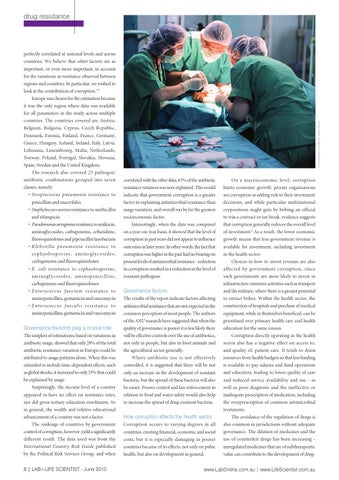 perfectly correlated at national levels and across countries. We believe that other factors are as important, or even more important, to account for the variations in resistance observed between regions and countries. In particular, we wished to look at the contribution of corruption.”5 Europe was chosen for the estimation because it was the only region where data was available for all parameters in the study across multiple © iStockphoto.com/Beyza Sultan Durna

correlated with the other data, 63% of the antibiotic

On a macroeconomic level, corruption

resistance variation was now explained. This would

indicate that government corruption is a greater

see corruption as adding risk to their investment

factor in explaining antimicrobial resistance than

decisions, and while particular multinational

usage variation, and overall was by far the greatest

to win a contract or tax break, evidence suggests

Interestingly, when the data was compared

on a year-on-year basis, it showed that the level of

of investment.6 As a result, the lower economic

corruption in past years did not appear to influence

outcomes in later years. In other words, the fact that

corruption was higher in the past had no bearing on

in the health sector.

Choices in how to invest revenue are also

in corruption resulted in a reduction in the level of

affected by government corruption, since

such governments are more likely to invest in

infrastructure-intensive activities such as transport

and the military, where there is a greater potential

The results of the report indicate factors affecting

to extract bribes. Within the health sector, the

antimicrobial resistance that are not expected in the

construction of hospitals and purchase of medical

common perception of most people. The authors

equipment, while in themselves beneficial, can be

of the ANU research have suggested that when the

quality of governance is poorer it is less likely there

education for the same reason.

The simplest of estimations, based on variations in

will be effective controls over the use of antibiotics,

Corruption directly operating in the health

antibiotic usage, showed that only 28% of the total

not only in people, but also in food animals and

sector also has a negative effect on access to,

antibiotic resistance variation in Europe could be

and quality of, patient care. It tends to drain

attributed to usage patterns alone. When this was

Where antibiotic use is not effectively

resources from health budgets so that less funding

extended to include time-dependent effects, such

controlled, it is suggested that there will be not

is available to pay salaries and fund operations

as global shocks, it increased to only 33% that could

only an increase in the development of resistant

and education, leading to lower quality of care

be explained by usage.

bacteria, but the spread of these bacteria will also

and reduced service availability and use - as

Surprisingly, the income level of a country

be easier. Poorer control and law enforcement in

well as poor diagnosis and the ineffective or

appeared to have no effect on resistance rates,

relation to food and water safety would also help

inadequate prescription of medication, including

nor did gross tertiary education enrolments. So

to increase the spread of drug-resistant bacteria.

the overprescription of common antimicrobial

in general, the wealth and relative educational advancement of a country was not a factor.

How corruption affects the health sector

The avoidance of the regulation of drugs is

The rankings of countries by government

Corruption occurs to varying degrees in all

also common in jurisdictions without adequate

control of corruption, however, yield a significantly

governance. The dilution of medicines and the

different result. The data used was from the

costs, but it is especially damaging in poorer

use of counterfeit drugs has been increasing -

countries because of its effects, not only on pubic

unregulated medicines that are of subtherapeutic

by the Political Risk Services Group, and when

health, but also on development in general.

value can contribute to the development of drug-