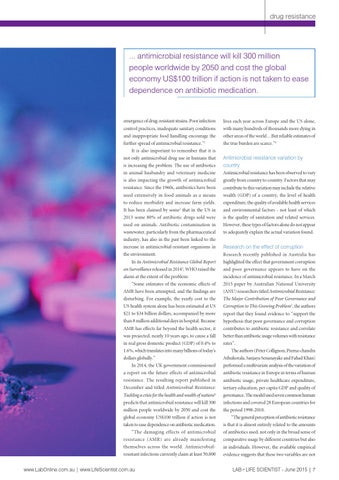 ... antimicrobial resistance will kill 300 million people worldwide by 2050 and cost the global economy US$100 trillion if action is not taken to ease dependence on antibiotic medication.

lives each year across Europe and the US alone,

with many hundreds of thousands more dying in

and inappropriate food handling encourage the

other areas of the world…But reliable estimates of

the true burden are scarce.”4

It is also important to remember that it is is increasing the problem. The use of antibiotics

in animal husbandry and veterinary medicine

Antimicrobial resistance has been observed to vary

is also impacting the growth of antimicrobial

greatly from country to country. Factors that may

resistance. Since the 1960s, antibiotics have been

contribute to this variation may include the relative

used extensively in food animals as a means

wealth (GDP) of a country, the level of health

It has been claimed by some2 that in the US in

and environmental factors - not least of which

is the quality of sanitation and related services.

used on animals. Antibiotic contamination in

However, these types of factors alone do not appear

wastewater, particularly from the pharmaceutical

not only antimicrobial drug use in humans that

industry, has also in the past been linked to the increase in antimicrobial-resistant organisms in

Research on the effect of corruption

Research recently published in Australia has

In its Antimicrobial Resistance Global Report

highlighted the effect that government corruption

on Surveillance released in 20143, WHO raised the

and poor governance appears to have on the

alarm at the extent of the problem:

incidence of antimicrobial resistance. In a March

“Some estimates of the economic effects of

AMR have been attempted, and the findings are

disturbing. For example, the yearly cost to the

The Major Contribution of Poor Governance and

US health system alone has been estimated at US

Corruption to This Growing Problem5, the authors

$21 to $34 billion dollars, accompanied by more

report that they found evidence to “support the

than 8 million additional days in hospital. Because

hypothesis that poor governance and corruption

AMR has effects far beyond the health sector, it

contributes to antibiotic resistance and correlate

was projected, nearly 10 years ago, to cause a fall

in real gross domestic product (GDP) of 0.4% to

1.6%, which translates into many billions of today’s dollars globally.”

In 2014, the UK government commissioned

performed a multivariate analysis of the variation of

a report on the future effects of antimicrobial

resistance. The resulting report published in

tertiary education, per capita GDP and quality of

Tackling a crisis for the health and wealth of nations

predicts that antimicrobial resistance will kill 300

infections and covered 28 European countries for

million people worldwide by 2050 and cost the

global economy US$100 trillion if action is not

“The general perception of antibiotic resistance

is that it is almost entirely related to the amounts

“The damaging effects of antimicrobial

of antibiotics used, not only in the broad sense of

themselves across the world. Antimicrobial-

in individuals. However, the available empirical

evidence suggests that these two variables are not