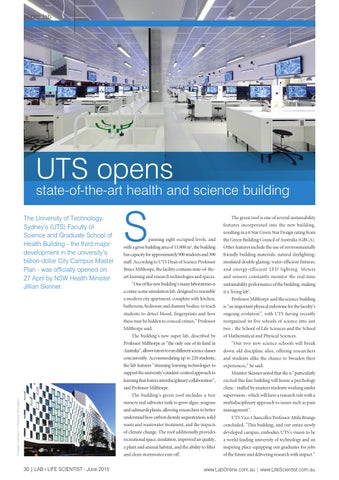 The green roof is one of several sustainability features incorporated into the new building, resulting in a 6 Star Green Star Design rating from

Other features include the use of environmentally

has capacity for approximately 900 students and 300

staff. According to UTS Dean of Science Professor

and sensors constantly monitor the real-time

“One of the new building’s many laboratories is

sustainability performance of the building, making

is “an important physical milestone for the faculty’s

students to detect blood, fingerprints and how

ongoing evolution”, with UTS having recently

these may be hidden to conceal crimes,” Professor

reorganised its five schools of science into just

of Mathematical and Physical Sciences.

Professor Milthorpe as “the only one of its kind in

concurrently. Accommodating up to 220 students,

and students alike the chance to broaden their

support the university’s student-centred approach to

Minister Skinner noted that she is “particularly

excited this fine building will house a psychology

supervision - which will have a research role with a

multidisciplinary approach to issues such as pain

waste and wastewater treatment, and the impacts

concluded, “This building, and our entire newly

a world-leading university of technology and an

a plant and animal habitat, and the ability to filter

of the future and delivering research with impact.”