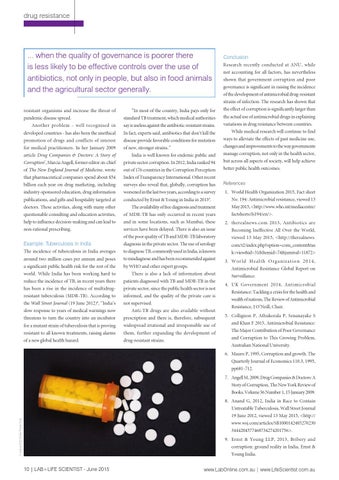 ... when the quality of governance is poorer there is less likely to be effective controls over the use of antibiotics, not only in people, but also in food animals and the agricultural sector generally.

Conclusion Research recently conducted at ANU, while not accounting for all factors, has nevertheless shown that government corruption and poor governance is significant in raising the incidence of the development of antimicrobial drug-resistant strains of infection. The research has shown that

“In most of the country, India pays only for

the effect of corruption is significantly larger than

the actual use of antimicrobial drugs in explaining

Another problem - well recognised in

say is useless against the antibiotic-resistant strains.

variations in drug resistance between countries.

developed countries - has also been the unethical

In fact, experts said, antibiotics that don’t kill the

While medical research will continue to find

promotion of drugs and conflicts of interest

ways to alleviate the effects of past medicine use,

for medical practitioners. In her January 2009

changes and improvements to the way governments

resistant organisms and increase the threat of pandemic disease spread.

India is well known for endemic public and

manage corruption, not only in the health sector,

but across all aspects of society, will help achieve

of The New England Journal of Medicine, wrote

out of 176 countries in the Corruption Perception

that pharmaceutical companies spend about $54

Index of Transparency International. Other recent

billion each year on drug marketing, including

worsened in the last two years, according to a survey

publications, and gifts and hospitality targeted at

doctors. These activities, along with many other

The availability of free diagnosis and treatment

of MDR-TB has only occurred in recent years

help to influence decision-making and can lead to

and in some locations, such as Mumbai, these

services have been delayed. There is also an issue

Becoming Ineffective All Over the World,

of the poor quality of TB and MDR-TB laboratory

diagnosis in the private sector. The use of serology

The incidence of tuberculosis in India averages

to diagnose TB, commonly used in India, is known

around two million cases per annum and poses

to misdiagnose and has been recommended against

a significant public health risk for the rest of the

by WHO and other expert groups.

world. While India has been working hard to

There is also a lack of information about

reduce the incidence of TB, in recent years there

patients diagnosed with TB and MDR-TB in the

has been a rise in the incidence of multidrug-

private sector, since the public health sector is not

resistant tuberculosis (MDR-TB). According to

informed, and the quality of the private care is

Anti-TB drugs are also available without

threatens to turn the country into an incubator

prescription and there is, therefore, subsequent

for a mutant strain of tuberculosis that is proving

widespread irrational and irresponsible use of

them, further expanding the development of

of a new global health hazard.