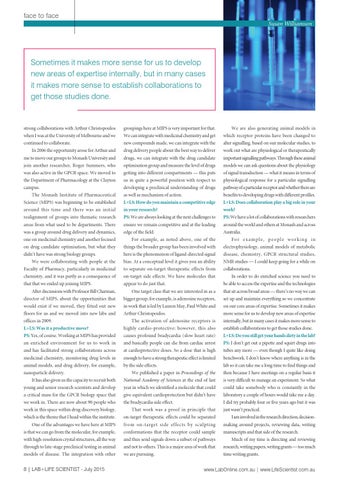 groupings here at MIPS is very important for that.

We are also generating animal models in

when I was at the University of Melbourne and we

We can integrate with medicinal chemistry and get

which receptor proteins have been changed to

new compounds made, we can integrate with the

alter signalling, based on our molecular studies, to

In 2006 the opportunity arose for Arthur and

drug delivery people about the best way to deliver

work out what are physiological or therapeutically

me to move our groups to Monash University and

drugs, we can integrate with the drug candidate

important signalling pathways. Through these animal

join another researcher, Roger Summers, who

optimisation group and measure the level of drugs

models we can ask questions about the physiology

was also active in the GPCR space. We moved to

getting into different compartments — this puts

of signal transduction — what it means in terms of

the Department of Pharmacology at the Clayton

us in quite a powerful position with respect to

physiological response for a particular signalling

developing a preclinical understanding of drugs

pathway of a particular receptor and whether there are

as well as mechanism of action.

Science (MIPS) was beginning to be established

L+LS: How do you maintain a competitive edge

L+LS: Does collaboration play a big role in your

around this time and there was an initial

realignment of groups into thematic research

PS: We are always looking at the next challenges to

PS: We have a lot of collaborations with researchers

areas from what used to be departments. There

ensure we remain competitive and at the leading

around the world and others at Monash and across

was a group around drug delivery and dynamics,

edge of the field.

The Monash Institute of Pharmaceutical

one on medicinal chemistry and another focused

For example, as noted above, one of the

For example, people working in

on drug candidate optimisation, but what they

things the broader group has been involved with

didn’t have was strong biology groups.

here is the phenomenon of ligand-directed signal

We were collaborating with people at the

bias. At a conceptual level it gives you an ability

NMR studies — I could keep going for a while on

Faculty of Pharmacy, particularly in medicinal

to separate on-target therapeutic effects from

chemistry, and it was partly as a consequence of

on-target side effects. We have molecules that

that that we ended up joining MIPS.

appear to do just that.

After discussions with Professor Bill Charman,

One target class that we are interested in as a

that sit across broad areas — there’s no way we can

director of MIPS, about the opportunities that

set up and maintain everything so we concentrate

would exist if we moved, they fitted out new

in work that is led by Lauren May, Paul White and

on our core areas of expertise. Sometimes it makes

floors for us and we moved into new labs and

more sense for us to develop new areas of expertise

The activation of adenosine receptors is

internally, but in many cases it makes more sense to

L+LS: Was it a productive move?

highly cardio-protective; however, this also

establish collaborations to get those studies done.

PS: Yes, of course. Working at MIPS has provided

L+LS: Do you still get your hands dirty in the lab?

an enriched environment for us to work in

and basically people can die from cardiac arrest

PS: I don’t get out a pipette and squirt drugs into

and has facilitated strong collaborations across

at cardioprotective doses. So a dose that is high

tubes any more — even though I quite like doing

enough to have a strong therapeutic effect is limited

benchwork. I don’t know where anything is in the

by the side effects.

We published a paper in Proceedings of the

then because I have meetings on a regular basis it

It has also given us the capacity to recruit both

National Academy of Sciences at the end of last

is very difficult to manage an experiment. So what

year in which we identified a molecule that could

could take somebody who is constantly in the

a critical mass for the GPCR biology space that

give equivalent cardioprotection but didn’t have

laboratory a couple of hours would take me a day.

we work in. There are now about 90 people who

the bradycardia side effect.

work in this space within drug discovery biology,

That work was a proof in principle that

which is the theme that I head within the institute.

on-target therapeutic effects could be separated

just wasn’t practical. I am involved in the research direction, decision-

One of the advantages we have here at MIPS

from on-target side effects by sculpting

is that we can go from the molecular, for example,

conformations that the receptor could sample

manuscripts and that side of the research.

with high-resolution crystal structures, all the way

and thus send signals down a subset of pathways

Much of my time is directing and reviewing

through to late-stage preclinical testing in animal

and not to others. This is a major area of work that

models of disease. The integration with other