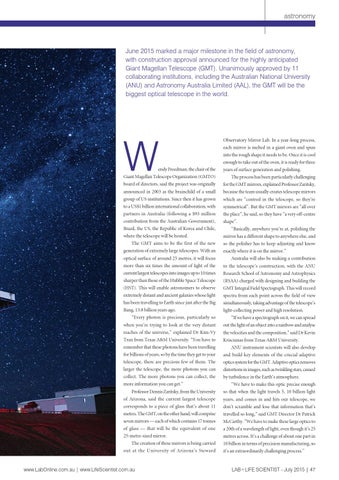 June 2015 marked a major milestone in the field of astronomy, with construction approval announced for the highly anticipated Giant Magellan Telescope (GMT). Unanimously approved by 11 collaborating institutions, including the Australian National University (ANU) and Astronomy Australia Limited (AAL), the GMT will be the biggest optical telescope in the world.

endy Freedman, the chair of the

Observatory Mirror Lab. In a year-long process, each mirror is melted in a giant oven and spun into the rough shape it needs to be. Once it is cool enough to take out of the oven, it is ready for three years of surface generation and polishing.

The process has been particularly challenging

board of directors, said the project was originally

announced in 2003 as the brainchild of a small

group of US institutions. Since then it has grown

which are “centred in the telescope, so they’re

to a US$1 billion international collaboration, with

symmetrical”. But the GMT mirrors are “all over

partners in Australia (following a $93 million

the place”, he said, so they have “a very off-centre

contribution from the Australian Government),

Brazil, the US, the Republic of Korea and Chile, where the telescope will be hosted. The GMT aims to be the first of the new generation of extremely large telescopes. With an

“Basically, anywhere you’re at, polishing the mirror has a different shape to anywhere else, and so the polisher has to keep adjusting and know exactly where it is on the mirror.”

optical surface of around 25 metres, it will focus

Australia will also be making a contribution

more than six times the amount of light of the

to the telescope’s construction, with the ANU

current largest telescopes into images up to 10 times

Research School of Astronomy and Astrophysics

sharper than those of the Hubble Space Telescope

(RSAA) charged with designing and building the

(HST). This will enable astronomers to observe

spectra from each point across the field of view

has been travelling to Earth since just after the Big

simultaneously, taking advantage of the telescope’s

“Every photon is precious, particularly so

“If we have a spectrograph on it, we can spread

when you’re trying to look at the very distant

out the light of an object into a rainbow and analyse

the velocities and the composition,” said Dr Kevin

Tran from Texas A&amp;M University. “You have to

remember that these photons have been travelling

for billions of years, so by the time they get to your

and build key elements of the crucial adaptive

telescope, there are precious few of them. The

larger the telescope, the more photons you can

distortions in images, such as twinkling stars, caused

collect. The more photons you can collect, the

by turbulence in the Earth’s atmosphere.

more information you can get.”

“We have to make this optic precise enough

Professor Dennis Zaritsky, from the University

so that when the light travels 5, 10 billion light

years, and comes in and hits our telescope, we

corresponds to a piece of glass that’s about 11

metres. The GMT, on the other hand, will comprise

seven mirrors — each of which contains 17 tonnes

McCarthy. “We have to make these large optics to

of glass — that will be the equivalent of one

metres across. It’s a challenge of about one part in

10 billion in terms of precision manufacturing, so it’s an extraordinarily challenging process.”