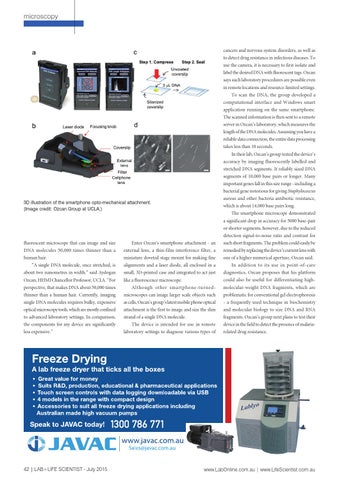 cancers and nervous system disorders, as well as to detect drug resistance in infectious diseases. To use the camera, it is necessary to first isolate and label the desired DNA with fluorescent tags. Ozcan says such laboratory procedures are possible even in remote locations and resource-limited settings. To scan the DNA, the group developed a computational interface and Windows smart application running on the same smartphone. The scanned information is then sent to a remote server in Ozcan’s laboratory, which measures the length of the DNA molecules. Assuming you have a reliable data connection, the entire data processing takes less than 10 seconds. In their lab, Ozcan’s group tested the device’s accuracy by imaging fluorescently labelled and stretched DNA segments. It reliably sized DNA segments of 10,000 base pairs or longer. Many important genes fall in this size range - including a bacterial gene notorious for giving Staphylococcus aureus and other bacteria antibiotic resistance,

which is about 14,000 base pairs long. The smartphone microscope demonstrated a significant drop in accuracy for 5000 base-pair or shorter segments, however, due to the reduced detection signal-to-noise ratio and contrast for

fluorescent microscope that can image and size

such short fragments. The problem could easily be

DNA molecules 50,000 times thinner than a

remedied by replacing the device’s current lens with

one of a higher numerical aperture, Ozcan said.

“A single DNA molecule, once stretched, is

alignments and a laser diode, all enclosed in a

In addition to its use in point-of-care

diagnostics, Ozcan proposes that his platform

could also be useful for differentiating high-

perspective, that makes DNA about 50,000 times

molecular-weight DNA fragments, which are

- a frequently used technique in biochemistry

attachment is the first to image and size the slim

and molecular biology to size DNA and RNA

to advanced laboratory settings. In comparison,

strand of a single DNA molecule.

fragments. Ozcan’s group next plans to test their

the components for my device are significantly less expensive.”

device in the field to detect the presence of malariarelated drug resistance.