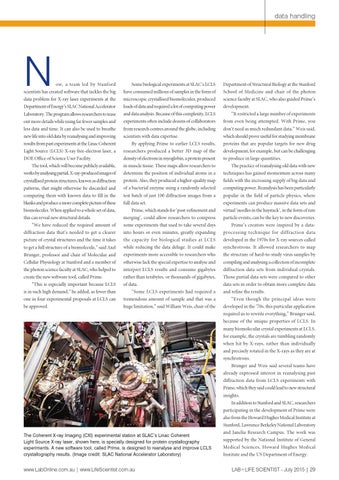 ow, a team led by Stanford

Some biological experiments at SLAC’s LCLS

Department of Structural Biology at the Stanford

scientists has created software that tackles the big

have consumed millions of samples in the form of

School of Medicine and chair of the photon

data problem for X-ray laser experiments at the

loads of data and required a lot of computing power

and data analysis. Because of this complexity, LCLS

“It restricted a large number of experiments

out more details while using far fewer samples and

experiments often include dozens of collaborators

from even being attempted. With Prime, you

less data and time. It can also be used to breathe

from research centres around the globe, including

new life into old data by reanalysing and improving

which should prove useful for studying membrane

results from past experiments at the Linac Coherent

proteins that are popular targets for new drug

researchers produced a better 3D map of the

development, for example, but can be challenging

density of electrons in myoglobin, a protein present

to produce in large quantities.

The tool, which will become publicly available,

in muscle tissue. These maps allow researchers to

The practice of reanalysing old data with new

determine the position of individual atoms in a

techniques has gained momentum across many

fields with the increasing supply of big data and

of a bacterial enzyme using a randomly selected

computing power. Reanalysis has been particularly

comparing them with known data to fill in the

test batch of just 100 diffraction images from a

popular in the field of particle physics, where

blanks and produce a more complete picture of these

biomolecules. When applied to a whole set of data, this can reveal new structural details.

Prime, which stands for ‘post-refinement and

virtual ‘needles in the haystack’, in the form of rare

merging’, could allow researchers to compress

particle events, can be the key to new discoveries.

“We have reduced the required amount of

some experiments that used to take several days

Prime’s creators were inspired by a data-

diffraction data that’s needed to get a clearer

into hours or even minutes, greatly expanding

picture of crystal structures and the time it takes

the capacity for biological studies at LCLS

developed in the 1970s for X-ray sources called

to get a full structure of a biomolecule,” said Axel

while reducing the data deluge. It could make

synchrotrons. It allowed researchers to map

Brunger, professor and chair of Molecular and

experiments more accessible to researchers who

the structure of hard-to-study virus samples by

Cellular Physiology at Stanford and a member of

otherwise lack the special expertise to analyse and

compiling and analysing a collection of incomplete

the photon science faculty at SLAC, who helped to

rather than terabytes, or thousands of gigabytes,

Those partial data sets were compared to other

“This is especially important because LCLS

and refine the results.

is in such high demand,” he added, as fewer than

“Some LCLS experiments had required a

one in four experimental proposals at LCLS can

tremendous amount of sample and that was a

“Even though the principal ideas were

developed in the ’70s, this particular application required us to rewrite everything,” Brunger said, because of the unique properties of LCLS. In many biomolecular crystal experiments at LCLS, for example, the crystals are tumbling randomly when hit by X-rays, rather than individually and precisely rotated in the X-rays as they are at synchrotrons. Brunger and Weis said several teams have already expressed interest in reanalysing past diffraction data from LCLS experiments with Prime, which they said could lead to new structural insights. In addition to Stanford and SLAC, researchers participating in the development of Prime were also from the Howard Hughes Medical Institute at Stanford, Lawrence Berkeley National Laboratory

and Janelia Research Campus. The work was supported by the National Institute of General Medical Sciences, Howard Hughes Medical Institute and the US Department of Energy.