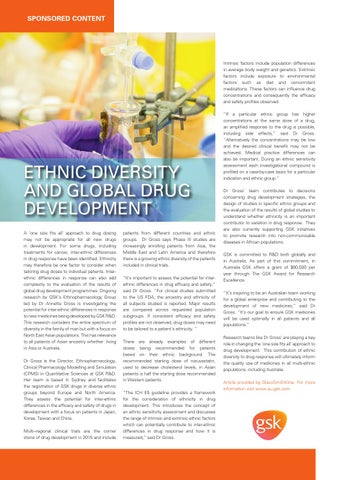 Intrinsic factors include population differences in average body weight and genetics. Extrinsic factors include exposure to environmental factors such as diet and concomitant medications. These factors can influence drug concentrations and consequently the efficacy and safety profiles observed. “If a particular ethnic group has higher concentrations at the same dose of a drug, an amplified response to the drug is possible, including side effects,” said Dr Gross. “Alternatively the concentrations may be low and the desired clinical benefit may not be achieved. Medical practice differences can also be important. During an ethnic sensitivity assessment each investigational compound is profiled on a case-by-case basis for a particular indication and ethnic group.”

ETHNIC DIVERSITY AND GLOBAL DRUG DEVELOPMENT A ‘one size fits all’ approach to drug dosing may not be appropriate for all new drugs in development. For some drugs, including treatments for cancer, inter-ethnic differences in drug response have been identified. Ethnicity may therefore be one factor to consider when tailoring drug doses to individual patients. Interethnic differences in response can also add complexity to the evaluation of the results of global drug development programmes. Ongoing research by GSK’s Ethnopharmacology Group led by Dr Annette Gross is investigating the potential for inter-ethnic differences in response to new medicines being developed by GSK R&amp;D. This research considers the entire spectrum of diversity in the family of man but with a focus on North East Asian populations. This has relevance to all patients of Asian ancestry whether living in Asia or Australia. Dr Gross is the Director, Ethnopharmacology, Clinical Pharmacology Modelling and Simulation (CPMS) in Quantitative Sciences at GSK R&amp;D. Her team is based in Sydney and facilitates the registration of GSK drugs in diverse ethnic groups beyond Europe and North America. They assess the potential for inter-ethnic differences in the efficacy and safety of drugs in development with a focus on patients in Japan, Korea, Taiwan and China. Multi–regional clinical trials are the corner stone of drug development in 2015 and include

patients from different countries and ethnic groups. Dr Gross says Phase III studies are increasingly enrolling patients from Asia, the Middle East and Latin America and therefore there is a growing ethnic diversity of the patients included in clinical trials. “It’s important to assess the potential for interethnic differences in drug efficacy and safety,” said Dr Gross. “For clinical studies submitted to the US FDA, the ancestry and ethnicity of all subjects studied is reported. Major results are compared across requested population subgroups. If consistent efficacy and safety profiles are not observed, drug doses may need to be tailored to a patient’s ethnicity. ” There are already examples of different doses being recommended for patients based on their ethnic background. The recommended starting dose of rosuvastatin, used to decrease cholesterol levels, in Asian patients is half the starting dose recommended in Western patients. “The ICH E5 guideline provides a framework for the consideration of ethnicity in drug development. This introduces the concept of an ethnic sensitivity assessment and discusses the range of intrinsic and extrinsic ethnic factors which can potentially contribute to inter-ethnic differences in drug response and how it is measured,” said Dr Gross.

Dr Gross’ team contributes to decisions concerning drug development strategies, the design of studies in specific ethnic groups and the evaluation of the results of global studies to understand whether ethnicity is an important contributor to variation in drug response. They are also currently supporting GSK initiatives to promote research into non-communicable diseases in African populations. GSK is committed to R&amp;D both globally and in Australia. As part of this commitment, in Australia GSK offers a grant of $80,000 per year through The GSK Award for Research Excellence. “It’s inspiring to be an Australian team working for a global enterprise and contributing to the development of new medicines,” said Dr Gross. “It’s our goal to ensure GSK medicines will be used optimally in all patients and all populations.” Research teams like Dr Gross’ are playing a key role in changing the ‘one size fits all’ approach to drug development. This contribution of ethnic diversity to drug response will ultimately inform the quality use of medicines in all multi-ethnic populations, including Australia. Article provided by GlaxoSmithKline. For more information visit www.au.gsk.com