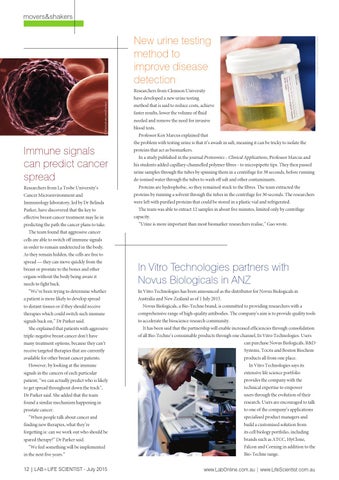 have developed a new urine testing

method that is said to reduce costs, achieve faster results, lower the volume of fluid needed and remove the need for invasive blood tests. Professor Ken Marcus explained that the problem with testing urine is that it’s awash in salt, meaning it can be tricky to isolate the proteins that act as biomarkers. In a study published in the journal Proteomics - Clinical Applications, Professor Marcus and his students added capillary-channelled polymer fibres - to micropipette tips. They then passed urine samples through the tubes by spinning them in a centrifuge for 30 seconds, before running de-ionised water through the tubes to wash off salt and other contaminants. Proteins are hydrophobic, so they remained stuck to the fibres. The team extracted the

proteins by running a solvent through the tubes in the centrifuge for 30 seconds. The researchers

were left with purified proteins that could be stored in a plastic vial and refrigerated.

Parker, have discovered that the key to effective breast cancer treatment may lie in predicting the path the cancer plans to take.

The team was able to extract 12 samples in about five minutes, limited only by centrifuge capacity. “Urine is more important than most biomarker researchers realise,” Gao wrote.

The team found that aggressive cancer cells are able to switch off immune signals in order to remain undetected in the body. As they remain hidden, the cells are free to spread — they can move quickly from the breast or prostate to the bones and other organs without the body being aware it needs to fight back. “We’ve been trying to determine whether a patient is more likely to develop spread to distant tissues or if they should receive

therapies which could switch such immune

comprehensive range of high-quality antibodies. The company’s aim is to provide quality tools

signals back on,” Dr Parker said.

to accelerate the bioscience research community.

It has been said that the partnership will enable increased efficiencies through consolidation of all Bio-Techne’s consumable products through one channel, In Vitro Technologies. Users

many treatment options, because they can’t

receive targeted therapies that are currently

available for other breast cancer patients.

products all from one place.

However, by looking at the immune

In Vitro Technologies says its

signals in the cancers of each particular

patient, “we can actually predict who is likely

provides the company with the

to get spread throughout down the track”,

Dr Parker said. She added that the team

users through the evolution of their

found a similar mechanism happening in

research. Users are encouraged to talk

to one of the company’s applications

“When people talk about cancer and

build a customised solution from

forgetting is: can we work out who should be

its cell biology portfolio, including

brands such as ATCC, HyClone,

“We feel something will be implemented in the next five years.”

Falcon and Corning in addition to the Bio-Techne range.