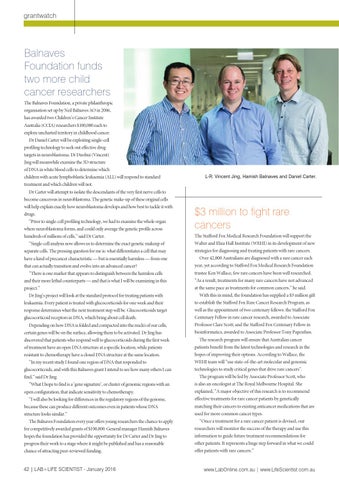 treatment and which children will not. Dr Carter will attempt to isolate the descendants of the very first nerve cells to become cancerous in neuroblastoma. The genetic make-up of these original cells will help explain exactly how neuroblastoma develops and how best to tackle it with

where neuroblastoma forms, and could only average the genetic profile across

The Stafford Fox Medical Research Foundation will support the

drugs. “Prior to single-cell profiling technology, we had to examine the whole organ

“Single-cell analysis now allows us to determine the exact genetic makeup of separate cells. The pressing question for me is: what differentiates a cell that may have a kind of precancer characteristic — but is essentially harmless — from one that can actually transition and evolve into an advanced cancer?

Walter and Eliza Hall Institute (WEHI) in its development of new strategies for diagnosing and treating patients with rare cancers. Over 42,000 Australians are diagnosed with a rare cancer each year, yet according to Stafford Fox Medical Research Foundation

“As a result, treatments for many rare cancers have not advanced

at the same pace as treatments for common cancers,” he said.

With this in mind, the foundation has supplied a $3 million gift

leukaemia. Every patient is treated with glucocorticoids for one week and their

to establish the Stafford Fox Rare Cancer Research Program, as

response determines what the next treatment step will be. Glucocorticoids target

well as the appointment of two centenary fellows: the Stafford Fox

glucocorticoid receptors in DNA, which bring about cell death.

Depending on how DNA is folded and compacted into the nuclei of our cells, certain genes will be on the surface, allowing them to be activated. Dr Jing has discovered that patients who respond well to glucocorticoids during the first week

of treatment have an open DNA structure at a specific location, while patients

patients benefit from the latest technologies and research in the

resistant to chemotherapy have a closed DNA structure at the same location.

hopes of improving their options. According to Wallace, the

“In my recent study I found one region of DNA that responded to glucocorticoids, and with this Balnaves grant I intend to see how many others I can find,” said Dr Jing. “What I hope to find is a ‘gene signature’, or cluster of genomic regions with an open configuration, that indicate sensitivity to chemotherapy. “I will also be looking for differences in the regulatory regions of the genome,

WEHI team will “use state-of-the-art molecular and genomic technologies to study critical genes that drive rare cancers”. The program will be led by Associate Professor Scott, who is also an oncologist at The Royal Melbourne Hospital. She explained, “A major objective of this research is to recommend effective treatments for rare cancer patients by genetically

because these can produce different outcomes even in patients whose DNA

matching their cancers to existing anticancer medications that are

“Once a treatment for a rare cancer patient is devised, our

researchers will monitor the success of the therapy and use this

other patients. It represents a huge step forward in what we could