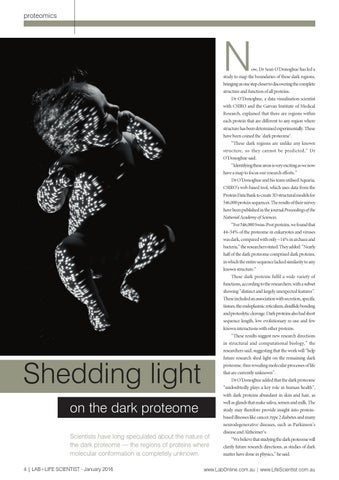 study to map the boundaries of these dark regions, bringing us one step closer to discovering the complete structure and function of all proteins. Dr O’Donoghue, a data visualisation scientist with CSIRO and the Garvan Institute of Medical Research, explained that there are regions within each protein that are different to any region where structure has been determined experimentally. These have been coined the ‘dark proteome’. “These dark regions are unlike any known structure, so they cannot be predicted,” Dr O’Donoghue said. “Identifying these areas is very exciting as we now have a map to focus our research efforts.” Dr O’Donoghue and his team utilised Aquaria, CSIRO’s web-based tool, which uses data from the Protein Data Bank to create 3D structural models for 546,000 protein sequences. The results of their survey have been published in the journal Proceedings of the National Academy of Sciences. “For 546,000 Swiss-Prot proteins, we found that 44–54% of the proteome in eukaryotes and viruses was dark, compared with only ~14% in archaea and bacteria,” the researchers stated. They added: “Nearly half of the dark proteome comprised dark proteins, in which the entire sequence lacked similarity to any known structure.” These dark proteins fulfil a wide variety of functions, according to the researchers, with a subset showing “distinct and largely unexpected features”. These included an association with secretion, specific tissues, the endoplasmic reticulum, disulfide bonding and proteolytic cleavage. Dark proteins also had short sequence length, low evolutionary re-use and few known interactions with other proteins. “These results suggest new research directions in structural and computational biology,” the researchers said, suggesting that the work will “help future research shed light on the remaining dark

proteome, thus revealing molecular processes of life that are currently unknown”. Dr O’Donoghue added that the dark proteome “undoubtedly plays a key role in human health”, with dark proteins abundant in skin and hair, as

on the dark proteome

well as glands that make saliva, semen and milk. The study may therefore provide insight into proteinbased illnesses like cancer, type 2 diabetes and many neurodegenerative diseases, such as Parkinson’s

Scientists have long speculated about the nature of the dark proteome — the regions of proteins where molecular conformation is completely unknown. 4 | LAB+LIFE SCIENTIST - January 2016

disease and Alzheimer’s. “We believe that studying the dark proteome will clarify future research directions, as studies of dark matter have done in physics,” he said.