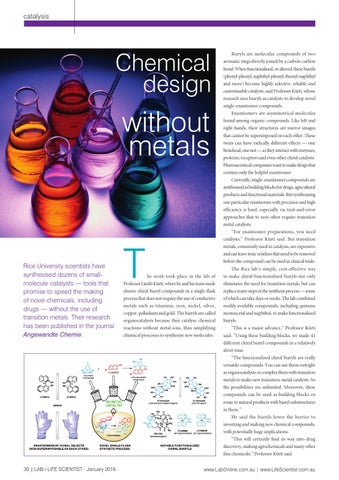 Biaryls are molecular compounds of two aromatic rings directly joined by a carbon-carbon bond. When functionalised, or altered, these biaryls (phenyl-phenyl, naphthyl-phenyl, thienyl-naphthyl and more) become highly selective, reliable and customisable catalysts, said Professor Kürti, whose research uses biaryls as catalysts to develop novel single-enantiomer compounds. Enantiomers are asymmetrical molecules found among organic compounds. Like left and right hands, their structures are mirror images that cannot be superimposed on each other. These twins can have radically different effects — one beneficial, one not — as they interact with enzymes, proteins, receptors and even other chiral catalysts. Pharmaceutical companies want to make drugs that contain only the helpful enantiomer. Currently, single-enantiomer compounds are synthesised as building blocks for drugs, agricultural products and functional materials. But synthesising one particular enantiomer with precision and high efficiency is hard, especially via trial-and-error approaches that to now often require transition metal catalysts. “For enantiomer preparations, you need

Rice University scientists have synthesised dozens of smallmolecule catalysts — tools that promise to speed the making of novel chemicals, including drugs — without the use of transition metals. Their research has been published in the journal Angewandte Chemie.

catalysts,” Professor Kürti said. But transition metals, commonly used in catalysis, are expensive and can leave toxic residues that need to be removed before the compound can be used in clinical trials. The Rice lab’s simple, cost-effective way he work took place in the lab of

Professor László Kürti, where he and his team made

eliminates the need for transition metals, but can

replace many steps in the synthesis process — some

process that does not require the use of conductive

of which can take days or weeks. The lab combined

copper, palladium and gold. The biaryls are called

monoacetal and naphthol, to make functionalised

organocatalysts because they catalyse chemical

“This is a major advance,” Professor Kürti said. “Using these building blocks, we made 41 different chiral biaryl compounds in a relatively short time. “The functionalised chiral biaryls are really versatile compounds. You can use them outright as organocatalysts or complex them with transition metals to make new transition-metal catalysts. So the possibilities are unlimited. Moreover, these compounds can be used as building blocks en route to natural products with biaryl substructures in them.” He said the biaryls lower the barrier to inventing and making new chemical compounds, with potentially huge implications. “This will certainly find its way into drug discovery, making agrochemicals and many other fine chemicals,” Professor Kürti said.