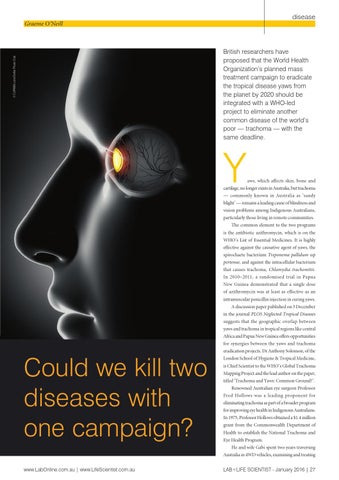 British researchers have proposed that the World Health Organization’s planned mass treatment campaign to eradicate the tropical disease yaws from the planet by 2020 should be integrated with a WHO-led project to eliminate another common disease of the world’s poor — trachoma — with the same deadline.

aws, which affects skin, bone and

cartilage, no longer exists in Australia, but trachoma — commonly known in Australia as ‘sandy blight’ — remains a leading cause of blindness and vision problems among Indigenous Australians, particularly those living in remote communities. The common element to the two programs is the antibiotic azithromycin, which is on the WHO’s List of Essential Medicines. It is highly effective against the causative agent of yaws, the spirochaete bacterium Treponema pallidum ssp pertenue, and against the intracellular bacterium that causes trachoma, Chlamydia trachomitis. In 2010–2011, a randomised trial in Papua New Guinea demonstrated that a single dose of azithromycin was at least as effective as an intramuscular penicillin injection in curing yaws. A discussion paper published on 3 December in the journal PLOS Neglected Tropical Diseases suggests that the geographic overlap between yaws and trachoma in tropical regions like central Africa and Papua New Guinea offers opportunities for synergies between the yaws and trachoma

Could we kill two diseases with one campaign?

eradication projects. Dr Anthony Solomon, of the London School of Hygiene &amp; Tropical Medicine, is Chief Scientist to the WHO’s Global Trachoma Mapping Project and the lead author on the paper, titled ‘Trachoma and Yaws: Common Ground?’. Renowned Australian eye surgeon Professor Fred Hollows was a leading proponent for eliminating trachoma as part of a broader program for improving eye health in Indigenous Australians. In 1975, Professor Hollows obtained a $1.4 million grant from the Commonwealth Department of Health to establish the National Trachoma and Eye Health Program. He and wife Gabi spent two years traversing Australia in 4WD vehicles, examining and treating