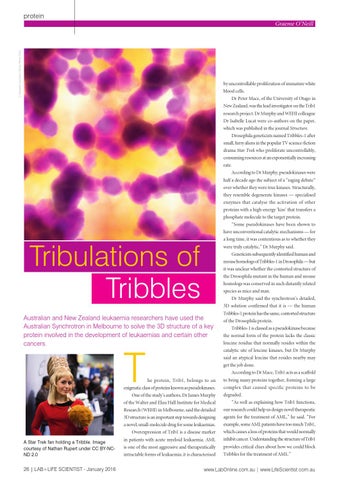 by uncontrollable proliferation of immature white blood cells. Dr Peter Mace, of the University of Otago in New Zealand, was the lead investigator on the Trib1 research project. Dr Murphy and WEHI colleague Dr Isabelle Lucat were co-authors on the paper, which was published in the journal Structure. Drosophila geneticists named Tribbles-1 after small, furry aliens in the popular TV science-fiction drama Star Trek who proliferate uncontrollably, consuming resources at an exponentially increasing rate. According to Dr Murphy, pseudokinases were half a decade ago the subject of a “raging debate” over whether they were true kinases. Structurally, they resemble degenerate kinases — specialised enzymes that catalyse the activation of other proteins with a high-energy ‘kiss’ that transfers a phosphate molecule to the target protein. “Some pseudokinases have been shown to have unconventional catalytic mechanisms — for a long time, it was contentious as to whether they

were truly catalytic,” Dr Murphy said. Geneticists subsequently identified human and mouse homologs of Tribbles-1 in Drosophila — but it was unclear whether the contorted structure of the Drosophila mutant in the human and mouse homologs was conserved in such distantly related species as mice and man. Dr Murphy said the synchrotron’s detailed, 3D solution confirmed that it is — the human

Australian and New Zealand leukaemia researchers have used the Australian Synchrotron in Melbourne to solve the 3D structure of a key protein involved in the development of leukaemias and certain other cancers.

of the Drosophila protein. Tribbles-1 is classed as a pseudokinase because the normal form of the protein lacks the classic leucine residue that normally resides within the catalytic site of leucine kinases, but Dr Murphy said an atypical leucine that resides nearby may get the job done. According to Dr Mace, Trib1 acts as a scaffold

he protein, Trib1, belongs to an

to bring many proteins together, forming a large

complex that caused specific proteins to be

One of the study’s authors, Dr James Murphy

of the Walter and Eliza Hall Institute for Medical

“As well as explaining how Trib1 functions,

our research could help us design novel therapeutic

3D structure is an important step towards designing

agents for the treatment of AML,” he said. “For

a novel, small-molecule drug for some leukaemias.

example, some AML patients have too much Trib1,

Overexpression of Trib1 is a disease marker

which causes a loss of proteins that would normally

is one of the most aggressive and therapeutically

provides critical clues about how we could block

intractable forms of leukaemia; it is characterised

Tribbles for the treatment of AML.”