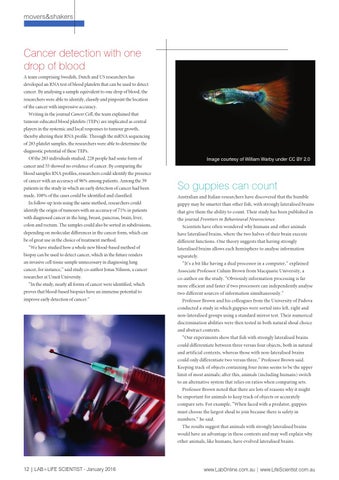 Cancer detection with one drop of blood A team comprising Swedish, Dutch and US researchers has developed an RNA test of blood platelets that can be used to detect cancer. By analysing a sample equivalent to one drop of blood, the researchers were able to identify, classify and pinpoint the location of the cancer with impressive accuracy. Writing in the journal Cancer Cell, the team explained that tumour-educated blood platelets (TEPs) are implicated as central players in the systemic and local responses to tumour growth, thereby altering their RNA profile. Through the mRNA sequencing of 283 platelet samples, the researchers were able to determine the diagnostic potential of these TEPs. Of the 283 individuals studied, 228 people had some form of

Image courtesy of William Warby under CC BY 2.0

cancer and 55 showed no evidence of cancer. By comparing the blood samples RNA profiles, researchers could identify the presence of cancer with an accuracy of 96% among patients. Among the 39 patients in the study in which an early detection of cancer had been

So guppies can count

made, 100% of the cases could be identified and classified.

Australian and Italian researchers have discovered that the humble

In follow-up tests using the same method, researchers could

guppy may be smarter than other fish, with strongly lateralised brains

that give them the ability to count. Their study has been published in

with diagnosed cancer in the lung, breast, pancreas, brain, liver,

the journal Frontiers in Behavioural Neuroscience.

colon and rectum. The samples could also be sorted in subdivisions,

Scientists have often wondered why humans and other animals

depending on molecular differences in the cancer form, which can

have lateralised brains, where the two halves of their brain execute

be of great use in the choice of treatment method.

different functions. One theory suggests that having strongly

“We have studied how a whole new blood-based method of biopsy can be used to detect cancer, which in the future renders an invasive cell tissue sample unnecessary in diagnosing lung

lateralised brains allows each hemisphere to analyse information separately. “It’s a bit like having a dual processor in a computer,” explained

co-author on the study. “Obviously information processing is far

“In the study, nearly all forms of cancer were identified, which proves that blood-based biopsies have an immense potential to improve early detection of cancer.”

more efficient and faster if two processors can independently analyse two different sources of information simultaneously.” Professor Brown and his colleagues from the University of Padova conducted a study in which guppies were sorted into left, right and non-lateralised groups using a standard mirror test. Their numerical discrimination abilities were then tested in both natural shoal choice and abstract contexts. “Our experiments show that fish with strongly lateralised brains could differentiate between three versus four objects, both in natural and artificial contexts, whereas those with non-lateralised brains could only differentiate two versus three,” Professor Brown said. Keeping track of objects containing four items seems to be the upper limit of most animals; after this, animals (including humans) switch to an alternative system that relies on ratios when comparing sets. Professor Brown noted that there are lots of reasons why it might be important for animals to keep track of objects or accurately compare sets. For example, “When faced with a predator, guppies must choose the largest shoal to join because there is safety in numbers,” he said. The results suggest that animals with strongly lateralised brains would have an advantage in these contexts and may well explain why other animals, like humans, have evolved lateralised brains.