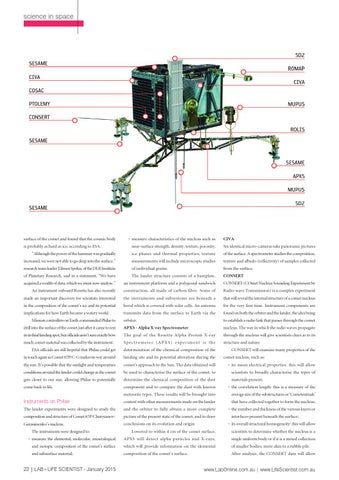 surface of the comet and found that the cosmic body is probably as hard as ice, according to ESA.

• measure characteristics of the nucleus such as

“Although the power of the hammer was gradually

of the surface. A spectrometer studies the composition,

increased, we were not able to go deep into the surface,”

measurements will include microscopic studies

of Planetary Research, said in a statement. “We have

The lander structure consists of a baseplate,

acquired a wealth of data, which we must now analyse.”

an instrument platform and a polygonal sandwich

An instrument onboard Rosetta has also recently

construction, all made of carbon fibre. Some of

Radio-wave Transmission) is a complex experiment

the instruments and subsystems are beneath a

that will reveal the internal structure of a comet nucleus

in the composition of the comet’s ice and its potential

hood which is covered with solar cells. An antenna

for the very first time. Instrument components are

implications for how Earth became a watery world.

transmits data from the surface to Earth via the

found on both the orbiter and the lander, the idea being

to establish a radio link that passes through the comet

nucleus. The way in which the radio waves propagate

in its final landing spot, but officials aren’t sure exactly how

The goal of the Rosetta Alpha Proton X-ray

through the nucleus will give scientists clues as to its

much comet material was collected by the instrument.

Spectrometer (APXS) experiment is the

ESA officials are still hopeful that Philae could get

landing site and its potential alteration during the

CONSERT will examine many properties of the

the sun. It’s possible that the sunlight and temperature

comet’s approach to the Sun. The data obtained will

• its mean electrical properties: this will allow

conditions around the lander could change as the comet

be used to characterise the surface of the comet, to

scientists to broadly characterise the types of

gets closer to our star, allowing Philae to potentially

determine the chemical composition of the dust

come back to life.

component and to compare the dust with known

• the correlation length: this is a measure of the

meteorite types. These results will be brought into

average size of the substructures or ‘Cometesimals’

context with other measurements made on the lander

that have collected together to form the nucleus;

The lander experiments were designed to study the

and the orbiter to fully obtain a more complete

• the number and thickness of the various layers or

composition and structure of Comet 67P/Churyumov-

picture of the present state of the comet, and to draw

conclusions on its evolution and origin.

comet nucleus, such as:

interfaces present beneath the surface; • its overall structural homogeneity: this will allow

Lowered to within 4 cm of the comet surface,

scientists to determine whether the nucleus is a

single uniform body or if it is a mixed collection

and isotopic composition of the comet’s surface

which will provide information on the elemental

of smaller bodies, more akin to a rubble pile.

composition of the comet’s surface.

After analysis, the CONSERT data will allow

The instruments were designed to: