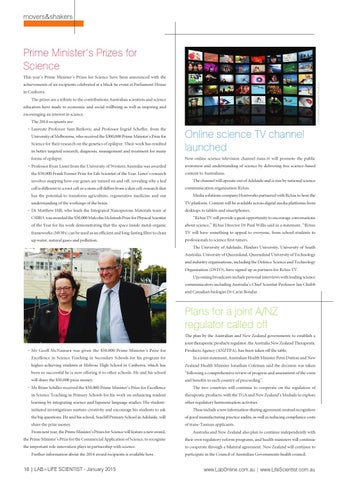 This year’s Prime Minister’s Prizes for Science have been announced with the achievements of six recipients celebrated at a black tie event at Parliament House in Canberra. The prizes are a tribute to the contributions Australian scientists and science educators have made to economic and social wellbeing as well as inspiring and encouraging an interest in science. The 2014 recipients are: • Laureate Professor Sam Berkovic and Professor Ingrid Scheffer, from the

in better targeted research, diagnosis, management and treatment for many

University of Melbourne, who received the $300,000 Prime Minister’s Prize for Science for their research on the genetics of epilepsy. Their work has resulted

• Professor Ryan Lister from the University of Western Australia was awarded the $50,000 Frank Fenner Prize for Life Scientist of the Year. Lister’s research involves mapping how our genes are turned on and off, revealing why a leaf cell is different to a root cell or a stem cell differs from a skin cell; research that has the potential to transform agriculture, regenerative medicine and our understanding of the workings of the brain. • Dr Matthew Hill, who leads the Integrated Nanoporous Materials team at

awareness and understanding of science by delivering free science-based content to Australians. The channel will operate out of Adelaide and is run by national science communication organisation RiAus. Media solutions company Hostworks partnered with RiAus to host the TV platform. Content will be available across digital media platforms from desktops to tablets and smartphones.

CSIRO, was awarded the $50,000 Malcolm McIntosh Prize for Physical Scientist

“RiAus TV will provide a great opportunity to encourage conversations

TV will have something to appeal to everyone, from school students to

up water, natural gases and pollution.

Plans for a joint A/NZ regulator called off The plan by the Australian and New Zealand governments to establish a joint therapeutic products regulator, the Australia New Zealand Therapeutic • Mr Geoff McNamara was given the $50,000 Prime Minister’s Prize for

Products Agency (ANZTPA), has been taken off the table.

Excellence in Science Teaching in Secondary Schools for his program for

higher-achieving students at Melrose High School in Canberra, which has

been so successful he is now offering it to other schools. He and his school

“following a comprehensive review of progress and assessment of the costs

and benefits to each country of proceeding”.

The two countries will continue to cooperate on the regulation of

therapeutic products, with the TGA and New Zealand’s Medsafe to explore

learning by integrating science and Japanese language studies. His student-

initiated investigations nurture creativity and encourage his students to ask

These include a new information-sharing agreement, mutual recognition

the big questions. He and his school, Seacliff Primary School in Adelaide, will

From next year, the Prime Minister’s Prizes for Science will feature a new award,

Australia and New Zealand also plan to continue independently with

the Prime Minister’s Prize for the Commercial Application of Science, to recognise

their own regulatory reform programs, and health ministers will continue

the important role innovation plays in partnership with science.

to cooperate through a bilateral agreement. New Zealand will continue to

Further information about the 2014 award recipients is available here.

participate in the Council of Australian Governments health council.