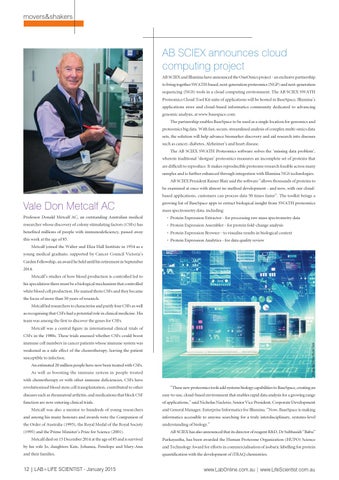 AB SCIEX announces cloud computing project AB SCIEX and Illumina have announced the OneOmics project - an exclusive partnership to bring together SWATH-based, next-generation proteomics (NGP) and next-generation sequencing (NGS) tools in a cloud computing environment. The AB SCIEX SWATH Proteomics Cloud Tool Kit suite of applications will be hosted in BaseSpace, Illumina’s applications store and cloud-based informatics community dedicated to advancing genomic analysis, at www.basespace.com. The partnership enables BaseSpace to be used as a single location for genomics and proteomics big data. With fast, secure, streamlined analysis of complex multi-omics data sets, the solution will help advance biomarker discovery and aid research into diseases such as cancer, diabetes, Alzheimer’s and heart disease. The AB SCIEX SWATH Proteomics software solves the ‘missing data problem’, wherein traditional ‘shotgun’ proteomics measures an incomplete set of proteins that are difficult to reproduce. It makes reproducible proteome research feasible across many samples and is further enhanced through integration with Illumina NGS technologies. AB SCIEX President Rainer Blair said the software “allows thousands of proteins to be examined at once with almost no method development - and now, with our cloudbased applications, customers can process data 50 times faster”. The toolkit brings a

researcher whose discovery of colony stimulating factors (CSFs) has

benefited millions of people with immunodeficiency, passed away

Metcalf joined the Walter and Eliza Hall Institute in 1954 as a young medical graduate, supported by Cancer Council Victoria’s Carden Fellowship, an award he held until his retirement in September 2014. Metcalf’s studies of how blood production is controlled led to his speculation there must be a biological mechanism that controlled white blood cell production. He named them CSFs and they became the focus of more than 50 years of research. Metcalf led researchers to characterise and purify four CSFs as well as recognising that CSFs had a potential role in clinical medicine. His team was among the first to discover the genes for CSFs. Metcalf was a central figure in international clinical trials of CSFs in the 1980s. These trials assessed whether CSFs could boost © Nmedia/Dollar Photo Club

immune cell numbers in cancer patients whose immune system was weakened as a side effect of the chemotherapy, leaving the patient susceptible to infection. An estimated 20 million people have now been treated with CSFs. As well as boosting the immune system in people treated with chemotherapy or with other immune deficiencies, CSFs have revolutionised blood stem cell transplantation, contributed to other

diseases such as rheumatoid arthritis, and medications that block CSF

Metcalf was also a mentor to hundreds of young researchers

and among his many honours and awards were the Companion of

informatics accessible to anyone searching for a truly interdisciplinary, systems-level

the Order of Australia (1993), the Royal Medal of the Royal Society

Purkayastha, has been awarded the Human Proteome Organization (HUPO) Science

by his wife Jo, daughters Kate, Johanna, Penelope and Mary-Ann

quantification with the development of iTRAQ chemistries.