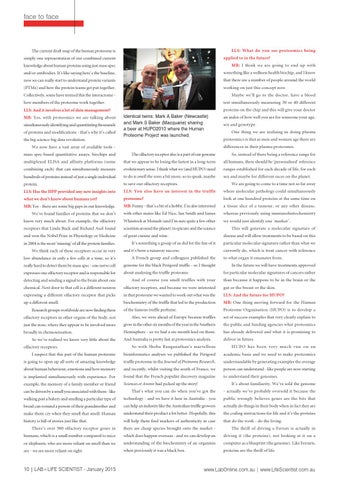 LLS: What do you see proteomics being

The current draft map of the human proteome is

applied to in the future?

MB: I think we are going to end up with

something like a wellness health biochip, and I know

now we can really start to understand protein variants

that there are a number of people around the world

(PTMs) and how the protein teams get put together.

working on just this concept now. Maybe we’ll go to the doctor, have a blood

Collectively, some have termed this the interactome -

how members of the proteome work together.

proteins on the chip and this will give your doctor

LLS: And it involves a lot of data management? MB: Yes, with proteomics we are talking about simultaneously identifying and quantitating thousands of proteins and modifications - that’s why it’s called the big science-big data revolution.

Identical twins: Mark A Baker (Newcastle) and Mark S Baker (Macquarie) sharing a beer at HUPO2010 where the Human Proteome Project was launched.

an index of how well you are for someone your age, sex and genotype. One thing we are realising in doing plasma proteomics is that as men and women age there are differences in their plasma proteomes.

We now have a vast array of available tools mass spec-based quantitative assays, biochips and

The olfactory receptor also is a part of our genome

So, instead of there being a reference range for

multiplexed ELISA and affinity platforms (some

all humans, there should be ‘personalised’ reference

combining each) that can simultaneously measure

evolutionary sense. I think what we (and HUPO) need

ranges established for each decade of life, for each

hundreds of proteins instead of just a single individual

to do is smell the roses a bit more, so to speak, maybe

sex and maybe for different races on the planet.

to save our olfactory receptors.

LLS: Has the HPP provided any new insights into

LLS: You also have an interest in the truffle

where molecular pathology could simultaneously

what we don’t know about humans yet?

look at one hundred proteins at the same time on

MB: Yes - there are some big gaps in our knowledge.

a tissue slice of a tumour, or any other disease,

We’ve found families of proteins that we don’t

with other mates like Ed Nice, Ian Smith and James

know very much about. For example, the olfactory

Whisstock at Monash (and I’m sure quite a few other

we would just identify one ‘marker’.

scientists around the planet) in epicure and the science

and won the Nobel Prize in Physiology or Medicine

of great cuisine and wine.

in 2004 is the most ‘missing’ of all the protein families. We think each of these receptors occur in very

It’s something a group of us did for the fun of it and it’s been a runaway success.

particular molecular signature rather than what we currently do, which is treat cancer with reference

low abundance in only a few cells at a time, so it’s

A French group and colleagues published the

really hard to detect them by mass spec - one nerve cell

genome for the black Périgord truffle - so I thought

expresses one olfactory receptor and is responsible for

about analysing the truffle proteome.

to what organ it emanates from. In the future we will have treatments approved for particular molecular signatures of cancers rather

detecting and sending a signal to the brain about one

And of course you smell truffles with your

chemical. Next door to that cell is a different neuron

gut or the breast or the skin.

in that proteome we wanted to work out what was the

LLS: And the future for HUPO?

up a different smell.

biochemistry of the truffle that led to the production

MB: One thing moving forward for the Human

of the famous truffle perfume.

Proteome Organisation (HUPO) is to develop a

than because it happens to be in the brain or the

olfactory receptors in other organs of the body, not

Also, we were ahead of Europe because truffles

set of success examples that very clearly explain to

just the nose, where they appear to be involved more

the public and funding agencies what proteomics

Hemisphere - so we had a six-month lead on them.

has already delivered and what it is promising to

And Australia is pretty fast at proteomics analysis.

So we’ve realised we know very little about the olfactory receptors.

So with Shoba Ranganathan’s marvellous

HUPO has been very much run on an

I suspect that this part of the human proteome

bioinformatics analyses we published the Périgord

academic basis and we need to make proteomics

is going to open up all sorts of amazing knowledge

truffle proteome in the Journal of Proteome Research,

understandable by generating examples the average

about human behaviour, emotions and how memory

and recently, whilst visiting the south of France, we

is implanted simultaneously with experience. For

to understand their genomes.

example, the memory of a family member or friend

Sciences et Avenir had picked up the story!

can be driven by a smell you associated with them - like

That’s what you can do when you’ve got the

- actually we’ve probably oversold it because the

walking past a bakery and smelling a particular type of

technology - and we have it here in Australia - you

public wrongly believes genes are the bits that

bread can remind a person of their grandmother and

can help an industry like the Australian truffle growers

actually do things in their body when in fact they are

make them cry when they smell that smell. Human

understand their product a lot better. Hopefully, this

the coding instructions for life and it’s the proteins

will help them find markers of authenticity in case

that do the work - do the living.

There’s over 500 olfactory receptor genes in

there are cheap species brought onto the market -

The thrill of driving a Ferrari is actually in

humans, which is a small number compared to mice

which does happen overseas - and we can develop an

driving it (the proteins), not looking at it on a

or elephants, who are more reliant on smell than we

understanding of the biochemistry of an organism

are - we are more reliant on sight.

when previously it was a black box.

proteins are the thrill of life.