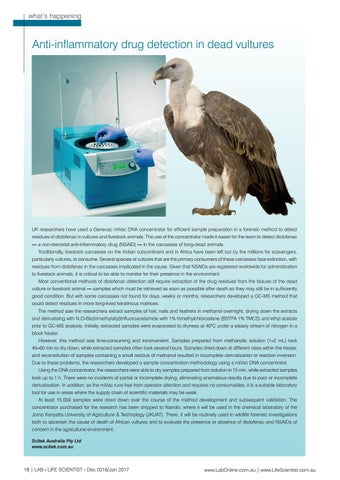 UK researchers have used a Genevac miVac DNA concentrator for efficient sample preparation in a forensic method to detect residues of diclofenac in vultures and livestock animals. The use of the concentrator made it easier for the team to detect diclofenac — a non-steroidal anti-inflammatory drug (NSAID) — in the carcasses of long-dead animals. Traditionally, livestock carcasses on the Indian subcontinent and in Africa have been left out by the millions for scavengers, particularly vultures, to consume. Several species of vultures that are the primary consumers of these carcasses face extinction, with residues from diclofenac in the carcasses implicated in the cause. Given that NSAIDs are registered worldwide for administration to livestock animals, it is critical to be able to monitor for their presence in the environment. Most conventional methods of diclofenac detection still require extraction of the drug residues from the tissues of the dead vulture or livestock animal — samples which must be retrieved as soon as possible after death so they may still be in sufficiently good condition. But with some carcasses not found for days, weeks or months, researchers developed a GC-MS method that could detect residues in more long-lived keratinous matrices. The method saw the researchers extract samples of hair, nails and feathers in methanol overnight, drying down the extracts and derivatising with N,O-Bis(trimethylsilyl)trifluoroacetamide with 1% trimethylchlorosilane (BSTFA 1% TMCS) and ethyl acetate prior to GC-MS analysis. Initially, extracted samples were evaporated to dryness at 40°C under a steady stream of nitrogen in a block heater. However, this method was time-consuming and inconvenient. Samples prepared from methanolic solution (1–2 mL) took 45–60 min to dry down, while extracted samples often took several hours. Samples dried down at different rates within the heater, and reconstitution of samples containing a small residue of methanol resulted in incomplete derivatisation or reaction inversion. Due to these problems, the researchers developed a sample concentration methodology using a miVac DNA concentrator. Using the DNA concentrator, the researchers were able to dry samples prepared from solution in 15 min, while extracted samples took up to 1 h. There were no incidents of partial or incomplete drying, eliminating anomalous results due to poor or incomplete derivatisation. In addition, as the miVac runs free from operator attention and requires no consumables, it is a suitable laboratory tool for use in areas where the supply chain of scientific materials may be weak. At least 15,000 samples were dried down over the course of the method development and subsequent validation. The concentrator purchased for the research has been shipped to Nairobi, where it will be used in the chemical laboratory of the Jomo Kenyatta University of Agriculture & Technology (JKUAT). There, it will be routinely used in wildlife forensic investigations both to ascertain the cause of death of African vultures and to evaluate the presence or absence of diclofenac and NSAIDs of concern in the agricultural environment. Scitek Australia Pty Ltd www.scitek.com.au