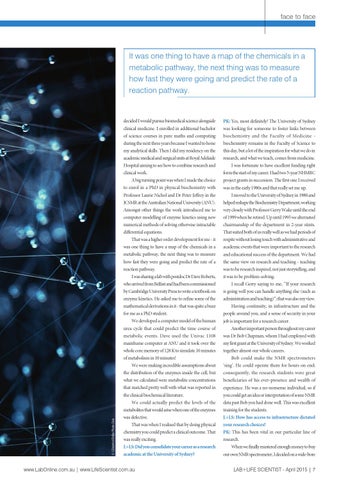 It was one thing to have a map of the chemicals in a metabolic pathway, the next thing was to measure how fast they were going and predict the rate of a reaction pathway.

decided I would pursue biomedical science alongside

PK: Yes, most definitely! The University of Sydney

was looking for someone to foster links between

of science courses in pure maths and computing

biochemistry and the Faculty of Medicine -

during the next three years because I wanted to hone

biochemistry remains in the Faculty of Science to

my analytical skills. Then I did my residency on the

this day, but a lot of the inspiration for what we do in

research, and what we teach, comes from medicine.

Hospital aiming to see how to combine research and clinical work. A big turning point was when I made the choice to enrol in a PhD in physical biochemistry with

project grants in succession. The first one I received was in the early 1980s and that really set me up.

Professor Laurie Nichol and Dr Peter Jeffrey in the

I moved to the University of Sydney in 1980 and

Amongst other things the work introduced me to

very closely with Professor Gerry Wake until the end

chairmanship of the department in 2-year stints.

That was a higher order development for me - it

respite without losing touch with administrative and

academic events that were important to the research

metabolic pathway, the next thing was to measure

and educational success of the department. We had

how fast they were going and predict the rate of a

the same view on research and teaching - teaching

was to be research inspired, not just storytelling, and

I was sharing a lab with postdoc Dr Dave Roberts,

it was to be problem-solving.

who arrived from Belfast and had been commissioned

I recall Gerry saying to me, “If your research

by Cambridge University Press to write a textbook on

is going well you can handle anything else (such as

enzyme kinetics. He asked me to refine some of the

administration and teaching)”; that was also my view.

mathematical derivations in it - that was quite a buzz for me as a PhD student. We developed a computer model of the human

Having continuity, in infrastructure and the people around you, and a sense of security in your job is important for a research career.

urea cycle that could predict the time course of

Another important person throughout my career

was Dr Bob Chapman, whom I had employed with

mainframe computer at ANU and it took over the

my first grant at the University of Sydney. We worked

together almost our whole careers.

of metabolism in 10 minutes!

Bob could make the NMR spectrometers

We were making incredible assumptions about

‘sing’. He could operate them for hours on end;

the distribution of the enzymes inside the cell, but

consequently, the research students were great

what we calculated were metabolite concentrations

beneficiaries of his ever-presence and wealth of

that matched pretty well with what was reported in

experience. He was a no-nonsense individual, so if

you could get an idea or interpretation of some NMR

We could actually predict the levels of the

I was fortunate to have excellent funding right form the start of my career. I had two 5-year NHMRC

data past Bob you had done well. This was excellent

metabolites that would arise when one of the enzymes

training for the students.

That was when I realised that by doing physical

chemistry you could predict a clinical outcome. That

PK: This has been vital in our particular line of

L+LS: Did you consolidate your career as a research academic at the University of Sydney?

When we finally mustered enough money to buy our own NMR spectrometer, I decided on a wide-bore