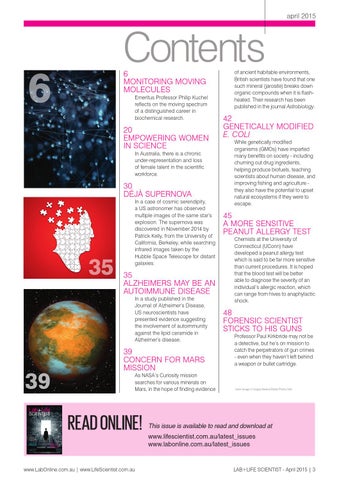 Emeritus Professor Philip Kuchel reflects on the moving spectrum of a distinguished career in biochemical research.

20 EMPOWERING WOMEN IN SCIENCE In Australia, there is a chronic under-representation and loss of female talent in the scientific workforce.

In a case of cosmic serendipity, a US astronomer has observed multiple images of the same star’s explosion. The supernova was discovered in November 2014 by Patrick Kelly, from the University of California, Berkeley, while searching infrared images taken by the Hubble Space Telescope for distant galaxies.

35 ALZHEIMERS MAY BE AN AUTOIMMUNE DISEASE In a study published in the Journal of Alzheimer’s Disease, US neuroscientists have presented evidence suggesting the involvement of autoimmunity against the lipid ceramide in Alzheimer’s disease.

39 CONCERN FOR MARS MISSION As NASA’s Curiosity mission searches for various minerals on Mars, in the hope of finding evidence

of ancient habitable environments, British scientists have found that one such mineral (jarosite) breaks down organic compounds when it is flashheated. Their research has been published in the journal Astrobiology.

42 GENETICALLY MODIFIED E. COLI While genetically modified organisms (GMOs) have imparted many benefits on society - including churning out drug ingredients, helping produce biofuels, teaching scientists about human disease, and improving fishing and agriculture they also have the potential to upset natural ecosystems if they were to escape.

45 A MORE SENSITIVE PEANUT ALLERGY TEST Chemists at the University of Connecticut (UConn) have developed a peanut allergy test which is said to be far more sensitive than current procedures. It is hoped that the blood test will be better able to diagnose the severity of an individual’s allergic reaction, which can range from hives to anaphylactic shock.

48 FORENSIC SCIENTIST STICKS TO HIS GUNS Professor Paul Kirkbride may not be a detective, but he’s on mission to catch the perpetrators of gun crimes - even when they haven’t left behind a weapon or bullet cartridge.