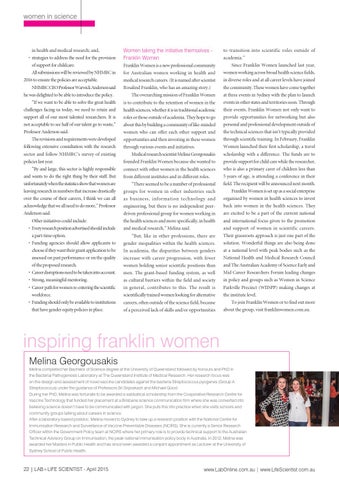 in health and medical research; and, • strategies to address the need for the provision

to transition into scientific roles outside of academia.”

of support for childcare.

All submissions will be reviewed by NHMRC in

for Australian women working in health and

medical research careers. (It is named after scientist

in diverse roles and at all career levels have joined

Rosalind Franklin, who has an amazing story.)

the community. These women have come together

2016 to ensure the policies are acceptable. NHMRC CEO Professor Warwick Anderson said he was delighted to be able to introduce the policy.

The overarching mission of Franklin Women

at three events in Sydney with the plan to launch

“If we want to be able to solve the great health

is to contribute to the retention of women in the

events in other states and territories soon. Through

challenges facing us today, we need to retain and

health sciences, whether it is in traditional academic

their events, Franklin Women not only want to

support all of our most talented researchers. It is

roles or those outside of academia. They hope to go

provide opportunities for networking but also

not acceptable to see half of our talent go to waste,”

about this by building a community of like-minded

personal and professional development outside of

women who can offer each other support and

opportunities and then investing in these women

through scientific training. In February, Franklin

through various events and initiatives.

The revisions and requirements were developed following extensive consultation with the research sector and follow NHMRC’s survey of existing policies last year. “By and large, this sector is highly responsible and wants to do the right thing by their staff. But

scholarship with a difference. The funds are to

founded Franklin Women because she wanted to

provide support for child care while the researcher,

connect with other women in the health sciences

who is also a primary carer of children less than

from different institutes and in different roles.

5 years of age, is attending a conference in their

unfortunately when the statistics show that women are

“There seemed to be a number of professional

groups for women in other industries such

Franklin Women is set up as a social enterprise

over the course of their careers, I think we can all

as business, information technology and

organised by women in health sciences to invest

acknowledge that we all need to do more,” Professor

engineering, but there is no independent peer-

back into women in the health sciences. They

are excited to be a part of the current national

the health sciences and more specifically, in health

and international focus given to the promotion

and support of women in scientific careers.

Other initiatives could include: • Every research position advertised should include a part-time option.

field. The recipient will be announced next month.

Their grassroots approach is just one part of the

• Funding agencies should allow applicants to

gender inequalities within the health sciences.

choose if they want their grant application to be

In academia, the disparities between genders

at a national level with peak bodies such as the

assessed on past performance or on the quality

increase with career progression, with fewer

of the proposed research.

and The Australian Academy of Science Early and

as cultural barriers within the field and society

in policy and groups such as Women in Science

in general, contributes to this. The result is

workforce. • Funding should only be available to institutions that have gender equity policies in place.

careers, often outside of the science field, because of a perceived lack of skills and/or opportunities

To join Franklin Women or to find out more about the group, visit franklinwomen.com.au.

Melina completed her Bachelor of Science degree at the University of Queensland followed by honours and PhD in the Bacterial Pathogenesis Laboratory at The Queensland Institute of Medical Research. Her research focus was on the design and assessment of novel vaccine candidates against the bacteria Streptococcus pyogenes (Group A Streptococcus) under the guidance of Professors Sri Sriprakash and Michael Good. During her PhD, Melina was fortunate to be awarded a sabbatical scholarship from the Cooperative Research Centre for Vaccine Technology that funded her placement at a Brisbane science communication firm where she was converted into believing science doesn’t have to be communicated with jargon. She puts this into practice when she visits schools and community groups talking about careers in science. After a laboratory-based postdoc, Melina moved to Sydney to take up a research position with the National Centre for Immunisation Research and Surveillance of Vaccine Preventable Diseases (NCIRS). She is currently a Senior Research Officer within the Government Policy team at NCIRS where her primary role is to provide technical support to the Australian Technical Advisory Group on Immunisation, the peak national immunisation policy body in Australia. In 2012, Melina was awarded her Masters in Public Health and has since been awarded a conjoint appointment as Lecturer at the University of Sydney School of Public Health.