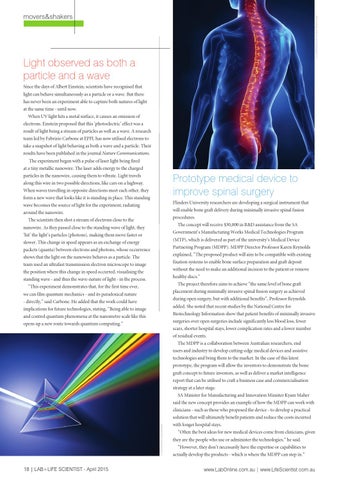 Light observed as both a particle and a wave Since the days of Albert Einstein, scientists have recognised that light can behave simultaneously as a particle or a wave. But there has never been an experiment able to capture both natures of light at the same time - until now. When UV light hits a metal surface, it causes an emission of electrons. Einstein proposed that this ‘photoelectric’ effect was a result of light being a stream of particles as well as a wave. A research team led by Fabrizio Carbone at EPFL has now utilised electrons to take a snapshot of light behaving as both a wave and a particle. Their results have been published in the journal Nature Communications. The experiment began with a pulse of laser light being fired at a tiny metallic nanowire. The laser adds energy to the charged

particles in the nanowire, causing them to vibrate. Light travels along this wire in two possible directions, like cars on a highway. When waves travelling in opposite directions meet each other, they form a new wave that looks like it is standing in place. This standing

Flinders University researchers are developing a surgical instrument that

wave becomes the source of light for the experiment, radiating

The scientists then shot a stream of electrons close to the

The concept will receive $30,000 in R&amp;D assistance from the SA

nanowire. As they passed close to the standing wave of light, they

‘hit’ the light’s particles (photons), making them move faster or

(MTP), which is delivered as part of the university’s Medical Device

slower. This change in speed appears as an exchange of energy

packets (quanta) between electrons and photons, whose occurrence

explained, “The proposed product will aim to be compatible with existing

shows that the light on the nanowire behaves as a particle. The

the position where this change in speed occurred, visualising the

standing wave - and thus the wave-nature of light - in the process.

“This experiment demonstrates that, for the first time ever,

we can film quantum mechanics - and its paradoxical nature

during open surgery, but with additional benefits”, Professor Reynolds

- directly,” said Carbone. He added that the work could have

added. She noted that recent studies by the National Centre for

implications for future technologies, stating, “Being able to image

and control quantum phenomena at the nanometre scale like this

opens up a new route towards quantum computing.”

scars, shorter hospital stays, lower complication rates and a lower number of residual events. The MDPP is a collaboration between Australian researchers, end users and industry to develop cutting-edge medical devices and assistive technologies and bring them to the market. In the case of this latest prototype, the program will allow the inventors to demonstrate the bone graft concept to future investors, as well as deliver a market intelligence report that can be utilised to craft a business case and commercialisation strategy at a later stage. SA Minister for Manufacturing and Innovation Minister Kyam Maher said the new concept provides an example of how the MDPP can work with clinicians - such as those who proposed the device - to develop a practical ©iStockPhoto.com/setixela

solution that will ultimately benefit patients and reduce the costs incurred

with longer hospital stays. “Often the best ideas for new medical devices come from clinicians, given they are the people who use or administer the technologies,” he said. “However, they don’t necessarily have the expertise or capabilities to actually develop the products - which is where the MDPP can step in.”