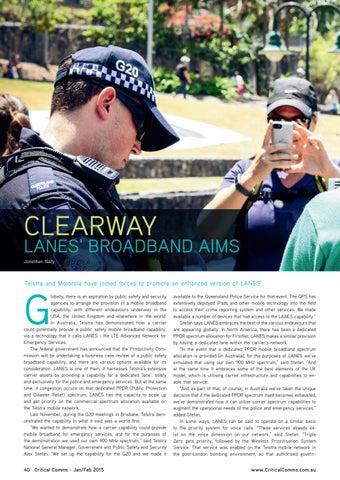 Telstra and Motorola have joined forces to promote an enhanced version of LANES'.

lobally, there is an aspiration by public safety and security agencies to arrange the provision of a mobile broadband capability, with different endeavours underway in the USA, the United Kingdom and elsewhere in the world. In Australia, Telstra has demonstrated how a carrier could potentially provide a public safety mobile broadband capability, via a technology that it calls LANES - the LTE Advanced Network for Emergency Services. The federal government has announced that the Productivity Commission will be undertaking a business case review of a public safety broadband capability, and there are various options available for its consideration. LANES is one of them. It harnesses Telstra’s extensive carrier assets by providing a capability for a dedicated ‘lane’, solely and exclusively for the police and emergency services. But at the same time, if congestion occurs on that dedicated PPDR (Public Protection and Disaster Relief) spectrum, LANES has the capacity to scale up and get priority on the commercial spectrum allocation available on the Telstra mobile network. Last November, during the G20 meetings in Brisbane, Telstra demonstrated the capability in what it said was a world first. “We wanted to demonstrate how a carrier capability could provide mobile broadband for emergency services, and for the purposes of the demonstration we used our own 900 MHz spectrum,” said Telstra National General Manager, Government and Public Safety and Security Alex Stefan. “We set up the capability for the G20 and we made it

available to the Queensland Police Service for that event. The QPS has extensively deployed iPads and other mobile technology into the field to access their crime reporting system and other services. We made available a number of devices that had access to the LANES capability.” Stefan says LANES embraces the best of the various endeavours that are appearing globally. In North America, there has been a dedicated PPDR spectrum allocation for FirstNet; LANES makes a similar provision by having a dedicated lane within the carrier’s network. “In the event that a dedicated PPDR mobile broadband spectrum allocation is provided [in Australia], for the purposes of LANES we’ve simulated that using our own 900 MHz spectrum,” said Stefan. “And at the same time it embraces some of the best elements of the UK model, which is utilising carrier infrastructure and capabilities to enable that service. “And as part of that, of course, in Australia we’ve taken the unique decision that if the dedicated PPDR spectrum itself becomes exhausted, we’ve demonstrated how it can utilise carrier spectrum capabilities to augment the operational needs of the police and emergency services,” added Stefan. In some ways, LANES can be said to operate on a similar basis to the priority system for voice calls. “These services already exist on the voice dimension on our network,” said Stefan. “Triple Zero gets priority, followed by the Wireless Prioritisation System Service. That service was enabled on the Telstra mobile network in the post-London bombing environment, so that authorised govern-