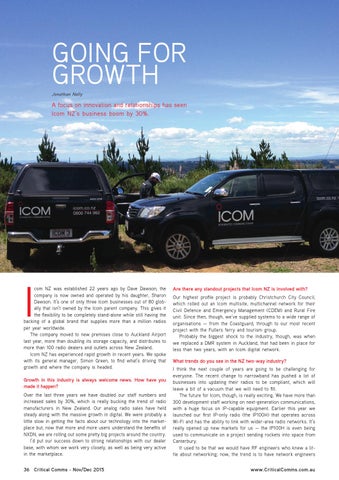 A focus on innovation and relationships has seen Icom NZ’s business boom by 30%.

com NZ was established 22 years ago by Dave Dawson; the company is now owned and operated by his daughter, Sharon Dawson. It’s one of only three Icom businesses out of 80 globally that isn’t owned by the Icom parent company. This gives it the flexibility to be completely stand-alone while still having the backing of a global brand that supplies more than a million radios per year worldwide. The company moved to new premises close to Auckland Airport last year, more than doubling its storage capacity, and distributes to more than 100 radio dealers and outlets across New Zealand. Icom NZ has experienced rapid growth in recent years. We spoke with its general manager, Simon Green, to find what’s driving that growth and where the company is headed.

Growth in this industry is always welcome news. How have you made it happen? Over the last three years we have doubled our staff numbers and increased sales by 30%, which is really bucking the trend of radio manufacturers in New Zealand. Our analog radio sales have held steady along with the massive growth in digital. We were probably a little slow in getting the facts about our technology into the marketplace but, now that more and more users understand the benefits of NXDN, we are rolling out some pretty big projects around the country. I’d put our success down to strong relationships with our dealer base, with whom we work very closely, as well as being very active in the marketplace.

Are there any standout projects that Icom NZ is involved with? Our highest profile project is probably Christchurch City Council, which rolled out an Icom multisite, multichannel network for their Civil Defence and Emergency Management (CDEM) and Rural Fire unit. Since then, though, we’ve supplied systems to a wide range of organisations — from the Coastguard, through to our most recent project with the Fullers ferry and tourism group. Probably the biggest shock to the industry, though, was when we replaced a DMR system in Auckland, that had been in place for less than two years, with an Icom digital network.

What trends do you see in the NZ two-way industry? I think the next couple of years are going to be challenging for everyone. The recent change to narrowband has pushed a lot of businesses into updating their radios to be compliant, which will leave a bit of a vacuum that we will need to fill. The future for Icom, though, is really exciting. We have more than 300 development staff working on next-generation communications, with a huge focus on IP-capable equipment. Earlier this year we launched our first IP-only radio (the IP100H) that operates across Wi-Fi and has the ability to link with wider-area radio networks. It’s really opened up new markets for us — the IP100H is even being used to communicate on a project sending rockets into space from Canterbury. It used to be that we would have RF engineers who knew a little about networking; now, the trend is to have network engineers